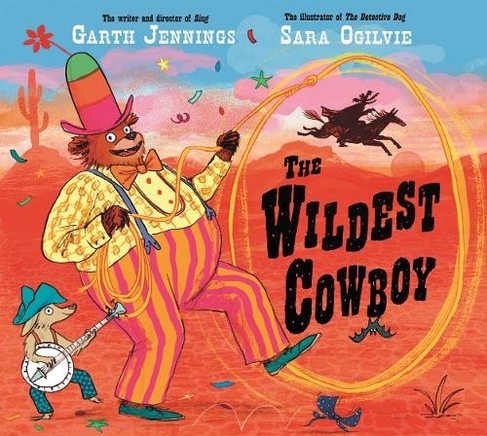 Way out in the West there's a town they call Fear And only the roughest and toughest live here . . . When cheerful salesman, Bingo B Brown, rolls his wagon full of Wild West goodies into town, he's met with a stony silence. This is clearly no place for novelty bow ties and elastic lassos. Not even Bingo's dancing dog can raise a smile! But this town is not just joyless, it's dangerous. And as Bingo soon discovers, the people of the town are not just scary, they're also scared. It isn't long before Bingo and his dog discover why, as they come face to face with the Wildest Cowboy in the West! Saddle up for a spectacular ride with a wildly talented pairing: film director and author, Garth Jennings and star illustrator, Sara Ogilvie. The Wildest Cowboy is a funny and uplifting adventure story in which fun wins out over fear. Featuring a dramatic train chase, rattlesnake socks and a dancing dog.

Garth Jennings has directed many music videos and commercials as one third of the production company Hammer and Tongs. His work includes videos for Blur, Radiohead, Beck, Fatboy Slim and Vampire Weekend. He is the director of two feature films - The Hitchhiker's Guide to the Galaxy (2005) and Son of Rambow (2007) for which he also wrote the screenplay. He also directed the Golden Globe nominated, Sing, a feature length animated film with an all-star cast, from the studio that created Despicable Me. He has also written The Deadly 7 for Macmillan Children's Books.Sara Ogilvie is an award-winning illustrator and printmaker who won the 2011 Booktrust Best New Illustrator Award and the Books are my Bag Readers Award, 2016. The first picture book that she illustrated, Dogs Don't Do Ballet, was also shortlisted for the Roald Dahl Funny Prize. In addition to working on her picture books, Sara lectures in Illustration and Graphic Design at Northumbria University and continues to create work that is exhibited worldwide. She is inspired by many things including old second-hand bookshops, old wives tales and trying to spell sounds. Sara lives in Newcastle upon Tyne.