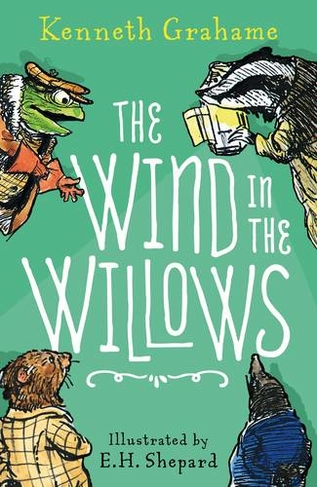 The Wind in the Willows: (Special edition)

"There's nothing - absolutely nothing - half so much worth doing as messing about in boats." One of the all-time great animal stories. Kenneth Grahame's classic children's book, with exclusive illustrations from EH Shepard has delighted generations. The perfect gift for any child. The Wild Wood seems a terrifying place to Mole, until he finds it's full of friends - Kind, sleepy Badger; brave and lively Ratty; and the irresponsible Mr Toad, famous for his wealth and his car smashes. But there are also the sinister weasels and stoats, and they capture Toad Hall when Mr Toad is in jail. How will he escape? And can the friends fight together to save Toad Hall? Kenneth Grahame's The Wind in the Willows needs no introduction. Entertaining adults and children alike for over a hundred years, characters such as Ratty, Mole, Badger and, of course, the irrepressible Mr Toad have influenced children's animal stories ever since. Fun, exciting, whimsical and dangerous at times, The Wind in the Willows can't help but spark a child's imagination. In this Egmont edition, Kenneth Grahame's classic animal book, is made all the more beautiful and enthralling thanks to the exclusive and original artwork by E. H. Shepard, the man who also illustrated Winnie-the-Pooh. Kenneth Grahame was born in 1859. He told his son stories about water rats and moles which became The Wind in the Willows, the book for which he is best known. He died in 1932. black & white illustrations

Kenneth Grahame was born in 1859. He grew up in Cookham Dene, Berkshire, in an idealised country cottage. Water meadows ran down to the River Thames; his passion for rivers can be seen in The Wind in the Willows. Kenneth went to school at St Edward's, Oxford. Prevented for family reasons from continuing on to university, he became a clerk at the Bank of England. By 1879 he belonged to several literary societies, and was writing pieces for papers, including the National Observer. A collection of his magazine articles were published in 1893: Pagan Papers. In 1898 he became Secretary to the Bank of England. Soon after, in 1899, he married Elspeth Thomson. Their son Alastair was born in 1900. It was on the evening of his fourth birthday that Kenneth Grahame first told his son a story about moles and water rats. This story was continued over the next three years, but it was only when Constance Smedley suggested that he make a book out of it that it took shape as The Wind in the Willows, and published by Methuen. The book was published on 8 October 1908. In 1931 Ernest H Shephard was asked to illustrate it, following his success with the illustrations in Winnie-the-Pooh. In 1908 Kenneth Grahame retired before moving to Pangbourne in 1924 where he lived until his death in 1932.