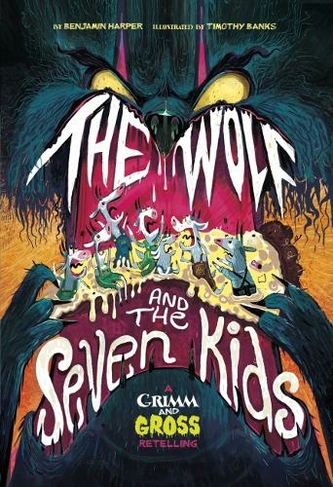 Mama Goat has seven little kids who are pretty clever for their age. Before Mama goes into the forest for some food, she warns the kids to stay inside and not let anyone in. Especially the Wolf! But soon after she leaves, the hairy menace shows up and tries to fool the suspicious siblings into believing he is their mother. Will the kids see through his clever disguises, or will they end up as breakfast, lunch and dinner? This fractured retelling of The Wolf and Seven Young Kids, will make readers giggle, groan and gasp with delight. Especially when they learn how a needle and thread come to the kids' rescue!

Benjamin Harper has worked as an editor at Lucasfilm LTD. and DC Comics. He currently works at Warner Bros. Consumer Products in Burbank, California. He has written many books, including Obsessed With Star Wars and Thank You, Superman! Timothy Banks is an award-winning illustrator known for his ability to create magically quirky illustrations for kids and adults. He began drawing at a very early age, and soon found that he loved creating pictures for his family and friends. His work has been described as edgy, whimsical, and fun, but he likes to think of his art as his most favorite thing in the world. Timothy creates his illustrations by using his computer, a drawing tablet and lots of imagination fueled by an overactive imagination (and sometimes ice cream). He has received honors and awards for his work from 3x3 Magazine, Creative Quarterly, Society of Illustrators Los Angeles and PLAY! Illustration. He has a Master of Fine Arts degree in Illustration from the Savannah College of Art & Design, and he also teaches fledgling art students in his spare time. Timothy lives in sunny Charleston, SC with his wonderful wife, two beautiful daughters, and two crazy pugs.