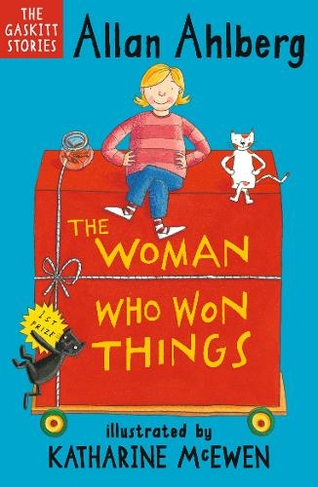 The Woman Who Won Things: (The Gaskitts)

The second of Allan Ahlberg's mini-masterpieces for early readers. One lucky morning ... Mrs Gaskitt opens the post and finds she's won a prize! Next she kisses the postman! Never mind, though - the postman is Mr Gaskitt doing his very latest job. Meanwhile, Gus and Gloria get a new teacher, Mrs Plum, with silvery hair, a big smile and a huge suitcase, who's ever so helpful when things start to go missing in the classroom. And then Mrs Gaskitt finds she's won another prize! What happens next?

Allan Ahlberg is one of the most acclaimed and successful authors of children's books writing today. He has won numerous awards for his books including the Kurt Maschler Award in 1986, the Children's Book Award in 1987, the Blue Peter Book Award 2001 and the Children's Book Award: Books for Young Children 2002. Among his numerous classic picture books are The Jolly Postman books, Burglar Bill, Peepo! and Each Peach Pear Plum. Allan's books for Walker include The Snail House, Everybody Was a Baby Once, The Runaway Dinner, Previouslyand The Pencil. He lives in Bath.Katharine McEwen graduated from Kingston University in 1996 and has since illustrated around forty children's books for all ages. She is the illustrator of the picture book Cows in the Kitchen, Hey, Tabby Cat! and Here Comes Tabby Cat, four Sam's Science books, the Silver Street series and the Gaskitt stories. Katharine lives in Tonbridge, Kent.