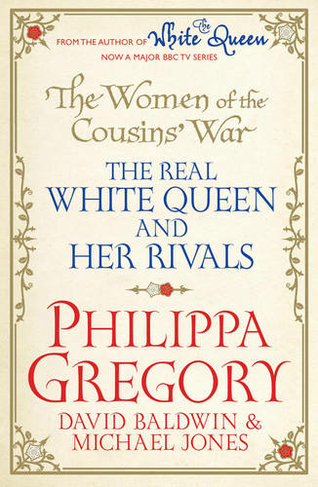 The Women of the Cousins' War: The Real White Queen And Her Rivals (TV Tie-In)

Elizabeth Woodville, The White Queen(2009), Margaret Beaufort, The Red Queen(2010), and Jacquetta, Lady Rivers, The Lady of the Rivers (2011) are the subjects of the first three novels in Philippa Gregory's Cousins' War series, and of the three biographical essays in this book. Philippa Gregory and two historians, leading experts in their field who helped Philippa to research the novels, tell the extraordinary 'true' stories of the life of these women who until now have been largely forgotten by history, their background and times, highlighting questions which are raised in the fiction and illuminating the novels. With a foreword by Philippa Gregory - in which Philippa writes revealingly about the differences between history and fiction and examines the gaps in the historical record - and beautifully illustrated with rare portraits, The Women of the Cousins' Waris an exciting addition to the Philippa Gregory oeuvre. 8pp b-w plates, integrated b-w illustrations EU Toy Safety Directive - No warning

PHILIPPA GREGORY is one of the world's foremost historical novelists. She wrote her first ever novel, Wideacre, when she was completing her PhD in eighteenth-century literature and it sold worldwide, heralding a new era for historical fiction. Her flair for blending history and imagination developed into a signature style and Philippa went on to write many bestselling novels, including The Other Boleyn Girl and The White Queen. Now a recognised authority on women's history, Philippa graduated from the University of Sussex and received a PhD from the University of Edinburgh, where she is a Regent and was made Alumna of the Year in 2009. She holds honorary degrees from Teesside University and the University of Sussex. She is a fellow of the Universities of Sussex and Cardiff and an honorary research fellow at Birkbeck University of London. Philippa is a member of the Society of Authors and in 2016 was presented with the Outstanding Contribution to Historical Fiction Award by the Historical Writers' Association. In 2018, she was awarded an Honorary Platinum Award by Neilsen for achieving significant lifetime sales across her entire book output. She welcomes visitors to her site www.PhilippaGregory.com. David Baldwin taught history at the Universities of Leicester and Nottingham for many years, and is the author of four books dealing with people and events of the Wars of the Roses, including the acclaimed Elizabeth Woodville, Mother of the Princes in the Tower. Michael Jones did his Ph.D. on the Beaufort family, and subsequently taught at the University of South West England, the University of Glasgow, and Winchester College. He is a Fellow of the Royal Historical Society and now works as a writer and media presenter. He is the author of six books, including The King's Mother, a highly praised biography of Margaret Beaufort, which was shortlisted for the Whitfield Prize.