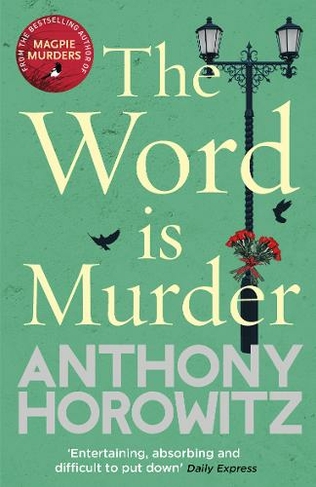 The Word Is Murder: The bestselling mystery from the author of Magpie Murders - you've never read a crime novel quite like this

By Anthony Horowitz (Author)
Paperback
The Word Is Murder: The bestselling mystery from the author of Magpie Murders - you've never read a crime novel quite like this is rated 3.0 out of 5 by 1.
https://www.whsmith.co.uk/products/the-word-is-murder-the-bestselling-mystery-from-the-author-of-magpie-murders--youve-never-read-a-cri/anthony-horowitz/paperback/9781784757236-12-000.html £7.37 rrp £8.99 Save £1.62 (18%)
GBP
Availability
In Stock
Free Delivery Available When You Spend £25 Or More
Details
Spend £25 On Eligible Products To Recieve Free Standard Delivery To You Home Or Free Next Working Day Click And Collect To Store
Share

Now available to preorder: Moonflower Murders, the latest fiendish murder mystery from Anthony Horowitz _________________ SHE PLANNED HER OWN FUNERAL. BUT DID SHE ARRANGE HER OWN MURDER? A woman is strangled six hours after organising her own funeral. Did she know she was going to die? Did she recognise her killer? Daniel Hawthorne, a recalcitrant detective with secrets of his own, is on the case, and he's found himself a sidekick - popular crime novelist Anthony Horowitz, who's struck a deal with Hawthorne to turn his latest case into a true crime bestseller. But the case is twistier and bloodier than Hawthorne had bargained for, and the unlikely duo of detective and writer find themselves neck deep in danger. When the written word is your only defence, you know you're in trouble when the word is murder... _________________ Buried secrets, murder and a trail of bloody clues lie at the heart of Anthony Horowitz's page-turning new detective series. If you enjoyed BBC's Sherlock, you'll LOVE The Word is Murder. Chosen as one of Crime Time's books of the year 'Raises the game-playing to Olympic level' - Guardian Books of the Year 'A real page-turner. I loved it!' - ALED JONES (ITV, Weekend) 'The beguiling whodunit plot is dispatched with characteristic elan as Horowitz blurs the line between fact and fiction' - Financial Times 'Splendidly entertaining, absorbing and difficult to put down. Hawthorne is an intriguing character' - Daily Express 'Sharp-witted readers who think they've solved the puzzle early on can rest assured that they've opened only one of many dazzling Christmas packages Horowitz has left beautifully wrapped under the tree' - Kirkus Reviews 'Deduction and wit are well-balanced, and fans of Peter Lovesey and other modern channelers of the spirit of the golden age of detection will clamor for more' - Publishers Weekly

Rated 3 out of 5 by Valerian70 from Hawthorne Investigates 3.5 Stars Admittedly I have read the Hawthorne books out of order but I found The Sentence Is Death to be the better of the two. In this one there is so little of Hawthorne to grab on to that he is, literally, just words on a page. I know this is deliberate as it accurately reflects the narrator's exasperation at knowing so little about the subject he is now to write about; but it did make it hard going at times. This is especially because it is almost an ego-piece at times with the narrator taking control of every aspect and lamenting his difficulties in writing the book about the Cowper Murder whilst he knows so little about his hero. There were many times I wanted to heartily slap Tony and tell him to get his head from a certain orifice, but I couldn't because this is a fiction piece and whilst the Tony we read about has the exact same career trajectory and home life as the actual author (confused yet?) they are not one and the same person. It is this conceit that dangerously blurs the lines between fact and fiction but somehow the plotting is so bizarre (and rather outlandish at times) that the reader is never in any real danger of mixing reality and fiction in to an homogenous blob - at least I hope they aren't. I did enjoy reading the book and before I started I had already promised myself that I would not try and figure out whodunnit as I knew it would be suitably obscured and every time something relevant was mentioned it would be immediately followed by a ton of obfuscation. I think if I had been trying to work out who the murderer was and what their motives were I would probably have just given up on the book. There is a certain wit and humour buried within the pages - but it is of a rather black and bleak sort (but that appeals to me). As a final aside I am pretty sure that Mr Horowitz does not know any Funeral Directors personally. He pretty much does a disservice to the profession in this book, painting them as dour and rather humourless individuals. Trust me on this, we really aren't (my first job and still my best ever job was as a Funeral Director's Assistant), there is just a certain demeanour expected from us when "on the job". In reality we generally have overdeveloped senses of humour and a strong sense of the ridiculous.

The author of the bestselling teen spy series, Alex Rider, ANTHONY HOROWITZ is also responsible for creating and writing some of the UK's most loved and successful TV series including Midsomer Murders and Foyle's War.He has also written two highly acclaimed Sherlock Holmes novels, The House of Silk and Moriarty, two James Bond novels, Trigger Mortis and Forever And A Day, and two bestselling crime novels, The Word is Murder and The Sentence is Death, starring Detective Daniel Hawthorne. In 2016 he wrote Magpie Murders which became a bestseller around the world, and was the recipient of eight literary awards in Japan. Moonflower Murders, which will be published in August 2020, continues the story.