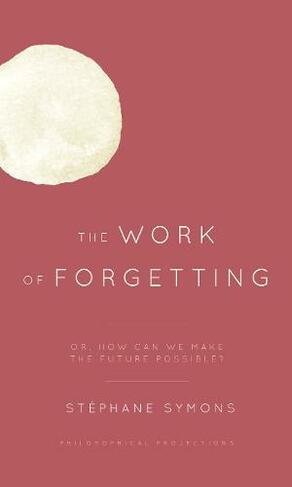 The Work of Forgetting: Or, How Can We Make the Future Possible? (Philosophical Projections)

By Stephane Symons (Author)
Hardback
https://www.whsmith.co.uk/products/the-work-of-forgetting-or-how-can-we-make-the-future-possible-philosophical-projections/stephane-symons/hardback/9781785523236-12-000.html £72.00 rrp £80.00 Save £8.00 (10%)
GBP
Availability
In Stock
With Free Standard Delivery To Your Home Or Store
Details
Spend £25 on eligible products to receive free standard delivery to home or free next working day click and collect to store
Share

For over fifty years the concept of memory has played a crucial role in a large number of academic and societal debates. The Work of Forgetting: Or, How Can We Make the Future Possible? draws attention to the limits of the academic field of memory studies. It argues that the faculty of memory offers an inadequate response to the challenges of the present. The book sets up a dialogue between the philosophies of forgetting that underlie the writings of Friedrich Nietzsche, Walter Benjamin and Gilles Deleuze, and the philosophies of memory that inform the work of Sigmund Freud, Martin Heidegger and Hannah Arendt. It builds on the idea that history is inseparable from a type of transience that cannot be counter-acted by the preserving work of memory and develops a new understanding of the phenomenon of forgetting in which the passage of time is asserted in thought and thus made productive. 2 Halftones, black and white