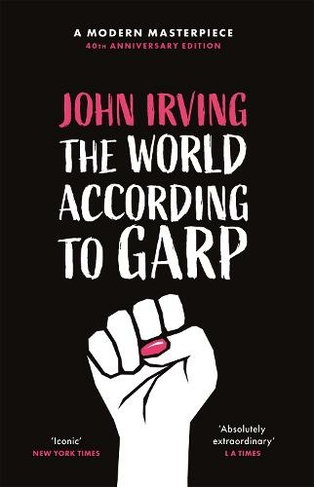 The World According To Garp

A masterpiece from one of the great contemporary American writers. 'A wonderful novel, full of energy and art, at once funny and heartbreaking...terrific' WASHINGTON POST Anniversary edition with a new afterword from the author. A worldwide bestseller since its publication, Irving's classic is filled with stories inside stories about the life and times of T. S. Garp, struggling writer and illegitimate son of Jenny Fields - an unlikely feminist heroine ahead of her time. Beautifully written, THE WORLD ACCORDING TO GARP is a powerfully compelling and compassionate coming-of-age novel that established John Irving as one of the most imaginative writers of his generation. 'A diamond sleeping in the dark, chipped out at last for our enrichment and delight...As approachable as it is brilliant' COSMOPOLITAN

John Irving, the novelist and screenwriter, competed as a wrestler for twenty years. He was Kurt Vonnegut's student in the Writers' Workshop at the University of Iowa, where Mr. Irving later taught. In 1980, he won a National Book Award for his novel The World According to Garp. In 2000, he won the Oscar for Best Adapted Screenplay for The Cider House Rules, which also won a Maggie Award from Planned Parenthood-in recognition of exceptional achievement in the area of reproductive rights. In 2012 and 2013, Mr. Irving won two Lambda Literary Awards: for Bisexual Fiction, for In One Person; also a Bridge Builder Award, for writing empathetically about the LGBTQ community. His novels have been translated into more than thirty-five languages.John Irving lives in Toronto. He is at work on a fifteenth novel-a ghost story, titled Darkness as a Bride-and he's in the process of adapting The World According to Garp as a television miniseries.