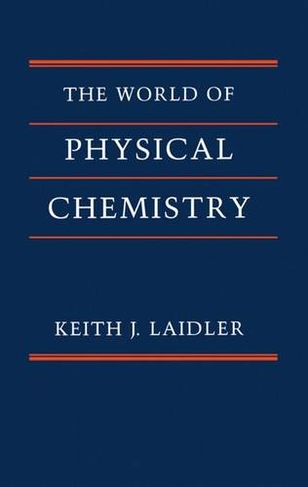 The World of Physical Chemistry

It is sometimes said that the year of birth of physical chemistry was 1887. In that year the journal Zeitschrift fur physikalische Chemie - the first journal devoted exclusively to physical chemistry - was launched and in its first year published important papers by Arrhenius and van't Hoff. However, a good deal of physical chemistry had been done previously. Two centuries earlier Robert Boyle had been carrying out physico-chemical investigations, and a good case can be made for regarding him as the first physical chemist. His approach to chemistry had a great influence on others, including Isaac Newton. In the eighteenth century Joseph Black and Antoine Lavoisier also did much that can be classed as physical chemistry. In the nineteenth century Robert Bunsen, Michael Farraday, and many others were contributing to the development of the subject. In this book Professor Laidler gives an account of the scientific development of Physical Chemistry over the years. He begins by discussing just what physical chemistry is, and how it relates to other sciences. He considers some of the difficulties faced by early investigators, as a result of attitudes of the churches, governments, and even the universities which at first were mainly interested in classical studies. Some account is also given of the way in which physical scientists have communicated with each other. Classical mechanics, and the modifications that had to be made to it, are briefly considered. The bulk of the book is concerned with the main branches of physical chemistry - thermodynamics, kinetic theory, statistical mechanics, spectroscopy, electrochemistry, kinetics, colloid and surface chemistry, and quantum chemistry - and how these subjects have developed up to the present time. frontispiece, halftones, line figures, tables