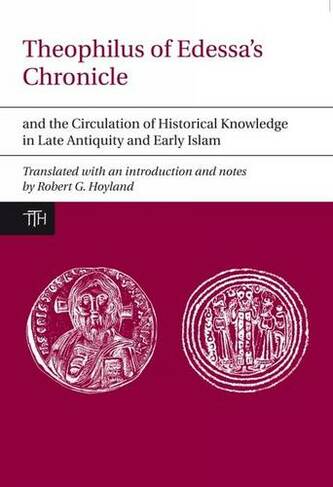 Theophilus of Edessa's Chronicle and the Circulation of Historical Knowledge in Late Antiquity and Early Islam: (Translated Texts for Historians)

By Robert G. Hoyland (Contributor)
Hardback
https://www.whsmith.co.uk/products/theophilus-of-edessas-chronicle-and-the-circulation-of-historical-knowledge-in-late-antiquity-and-ea/robert-g-hoyland/hardback/9781846316975-01-000.html £85.00
GBP
Availability
Currently unavailable. We don't know when or if this item will be back in stock
With Free Saver Delivery
Details
FREE SHIPPING over £20 for Saver Delivery
Share

Theophilus of Edessa was an astrologer in the court of the Muslim caliphs from the 750s to the 780s, a time when their capital, Baghdad, was a thriving cosmopolitan centre of culture and trade and one of the most populous and prosperous cities of the world. He was fluent in Greek, Syriac and Arabic, and he used this ability to bring together a number of historical sources in each of these languages and blend them into a single chronicle that charted events in the Near East from 590 to the 750s. His work is no longer extant, but it was cited extensively by a number of later historians and Robert Hoyland has collected and translated all these citations so as to give an impression of the scope and content of the original text. This is important, because this chronicle underlies much of our historical knowledge about the seventh and eighth century Near East, which was a crucial period in the region, witnessing as it did the devastating war between the two superpowers of Byzantium and Iran, the Arab conquests and the rise to power of the first Muslim Arab dynasty, the Umayyads (660-750), and their subsequent overthrow by a new dynasty, the Abbasids, who moved the capital of the Muslim Empire from Damascus to Baghdad. Hoyland also indicates the links between Theophilus' chronicle and other historical works, by Muslims as well as Christians, in order to illustrate the considerable degree of sharing of historical ideas and information that occurred among the various communities of the Near East. The material translated consists of the sections of four chroniclers that deal with the period 590-750s: one in Greek (Theophanes the Confessor, d. 818), one in Arabic (Agapius of Manbij, fl. 940s) and two in Syriac (Michael the Syrian, d. 1199, and an anonymous author, fl. 1230s, who were both relying on the chronicle of Dionysius of Telmahre, d. 845). The latter three either had not been translated into English before (thus Agapius and Michael the Syrian) or had only partially been translated (the anonymous chronicler of the 1230s).

Robert G. Hoyland is Professor of Late Antique and Early Islamic Middle East History at the Institute for Study of the Ancient World of New York University. Previous publications include 'Theophilus of Edessa's Chronicle and the Circulation of Historical Knowledge in Late Antiquity and Early Islam' (LUP, 2011).