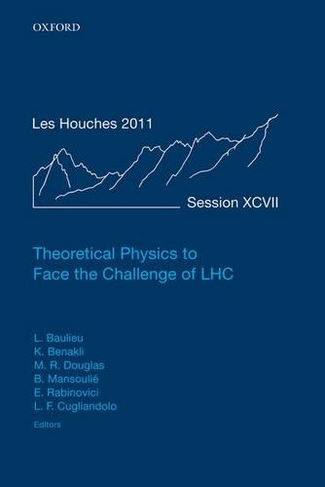 The book gathers the lecture notes of the Les Houches Summer School that was held in August 2011 for an audience of advanced graduate students and post-doctoral fellows in particle physics, theoretical physics, and cosmology, areas where new experimental results were on the verge of being discovered at CERN. Every Les Houches School has its own distinct character. This one was held during a summer of great anticipation that at any moment contact might be made with the most recent theories of the nature of the fundamental forces and the structure of space-time. In fact, during the session, the long anticipated discovery of the Higgs particle was announced. The book vividly describes the fruitful and healthy "schizophrenia" that is the rule among the community of theoreticians who have split into several components: those doing phenomenology, and those dealing with highly theoretical problems, with a few trying to bridge both domains. The lectures by theoreticians covered many directions in the theory of elementary particles, from classics such as the Supersymmetric Standard Model to very recent ideas such as the relation between black holes, hydrodynamics, and gauge-gravity duality. The lectures by experimentalists explained in detail how intensively and how precisely the LHC collider has verified the theoretical predictions of the Standard Model, predictions that were at the front lines of experimental discovery during the 70's, 80's and 90's, and how the LHC is ready to make new discoveries. They described many of the ingenious and pioneering techniques developed at CERN for the detection and the data analysis of billions of billions of proton-proton collisions. 123 b/w illustrations

Laurent Baulieu studied in Ecole Normale Superieure and taught physics in Ecole Polyechnique. He has been working on the theory of elementary particles, quantum field theory, and symmetries. He is Directeur de Rechercheurs at CNRS currently working at Laboratoire de physique theorique et des hautes energies in the University Pierre et Marie Curie, which is part of Paris Sorbonne University. He organized numerous schools and conferences around the World and co-editedproceedings from several of these including 'String theory: formal developments and applications' (with J. de Boer et al.), 'Theory and Particle Physics: the LHC perspective and beyond' (with J. de Boer et al.), and 'Strings and branes: the present paradigm for gauge interactions and cosmology'.Karim Benakli prepared his thesis at Ecole Polytechnique and was a post-doc at Texas A&M and ICTP Trieste, and fellow at CERN. He is Directeur de Recherches at CNRS working at Laboratoire de physique theorique et des hautes energies in the University Pierre et Marie Curie, which is part of Paris Sorbonne University. His main interests in research are on beyond the Standard Model high energy physics.Michael R. Douglas is a Professor at Stony Brook. He received his bachelor's degree in physics from Harvard University, and a Ph.D. in physics from Caltech in 1988. Douglas was a postdoc at the University of Chicago for one year, and then moved to Rutgers University in 1989 with Dan Friedan and Steve Shenker to help start the New High Energy Theory Center. He became an associate professor at Rutgers in 1995, and left for a year in 1997-1998 to take up a permanent position at the Institut desHautes Etudes Scientifiques. He then returned to Rutgers and in 2000 became the director of the NHETC. In 2008, Douglas moved from Rutgers to become the first permanent member of the Simons Center for Geometry and Physics. Douglas received the 2000 Sackler Prize in theoretical physics, holds a LouisMichel Visiting Professorship at the Institut des Hautes Etudes Scientifiques, and has been a Gordon Moore Visiting Scholar at Caltech, and a Clay Mathematics Institute Mathematical Emissary.Bruno Mansoulie obtained an engineering degree from Ecole Polytechnique, then a masters and Ph.D. in theoretical physics. He started his career working at CERN where participated in the discovery of the W, Z, and top particles. He Is now a member of the Atlas experiment in LHC. From 2002 to 2007 he was the director of the Service de Physique des Particules in CEA. He gives numerous talks on the LHC project and the problem of the origin of the elementary particle masses.Eliezer Rabinovici is Professor of Physics, holding the Leon H. and Ada G. Miller Chair of Science at the Racah Institute of Physics, Hebrew University of Jerusalem. He received there his BSc (1969) and MSc degrees (1971). He completed his PhD at the Weizmann Institute of Science in 1974. He was a postdoctoral fellow at Fermilab (1975-1976) and at Lawrence Berkeley Lab (1977). He has been at the Hebrew University since 1978 as Senior Lecturer, Associate Professor (1981) and Professor (1985). Hewas awarded the Miller Visiting Professorship at UC Berkeley (2003) and a Simons Distinguished Visiting Scholar at KITP UCSB (2014). He has been a fellow at the IAS Princeton and a visiting professor at the Michigan-Ann Arbor, Rutgers and Stanford Universities. He was awarded a Blaise PascalInternational chair at Paris VI and ENS (2013). He was awarded the Louis Michel visiting chair at IHES, France (2015).Leticia F. Cugliandolo received her Ph.D. in theoretical physics from the Universidad Nacional de La Plata, Argentina, in 1991. After post-docs in Universita di Roma I, La Sapienza, and CEA/Saclay she joined the Physics Department at Ecole Normale Superieure de Paris in 1997. She is currently a full professor at Universite Pierre et Marie Curie in Paris and the director of Ecole de Physique des Houches since 2007. Her research focuses on statistical physics