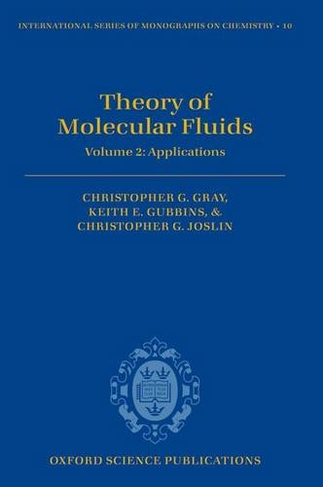 Existing texts on the statistical mechanics of liquids treat only spherical molecules. However, nearly all fluids of practical interest are composed of non-spherical molecules that are often dipolar or exhibit other kinds of electrostatic forces. This book describes the statistical mechanical theory of fluids of non-spherical molecules and its application to the calculation of physical properties, and is a sequel to Theory of Molecular Fluids. Volume 1: Fundamentals by C.G. Gray and K.E. Gubbins. The emphasis is on the new phenomena that arise due to the non-spherical nature of the intermolecular forces, such as new phase transitions, structural features and dielectric effects. It contains chapters on the thermodynamic properties of pure and mixed fluids, surface properties, X-ray and neutron diffraction structure factors, dielectric properties and spectroscopic properties. The book is aimed at beginning graduate students and research workers in chemistry, physics, materials science and engineering. 239 b/w line illustrations

Chris Gray has an undergraduate degree in Engineering Physics from Queen's University (Ontario) and M.Sc. and Ph.D. degrees in theoretical physics from the University of Toronto. Following postdoctoral work at McMaster University he joined the Physics Department of the University of Guelph as Assistant Professor in 1969, and became Full Professor in 1977. Following retirement from teaching in 2004 he became University Professor Emeritus. His research interests haveincluded molecular physics, theory of molecular liquids, and atomistic biosimulations.Keith Gubbins is W.H. Clark Distinguished University Professor of Engineering at North Carolina State University. Previously, he was T.R. Briggs Professor at Cornell University 1976-1997, and joined the University of Florida, as a postdctoral researcher in 1962, leaving as a Professor in 1976. He held numerous visiting professorships throughout the world, and has won several major awards, including a Guggenheim Fellowship (1986-7), a William H. Walker Award (American Inst. of Chemical Engrs.,2000), and a Joel H. Hildebrand Award for research on liquids (American Chemical Society, 2007).Chris Joslin, is at Corpus Christi College, Cambridge, UK, and has a D.Phil. in Chemistry from Oxford University, and an M.A., Natural Sciences, from Cambridge University.