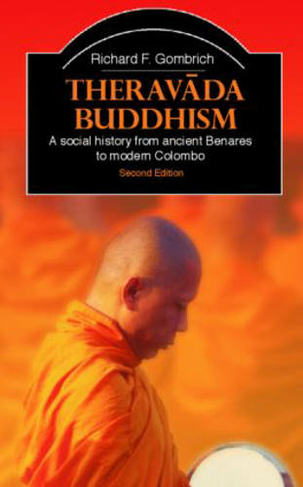 Also available on eBook for £26.39. Click here to purchase from Rakuten Kobo

Written by the leading authority on Theravada Buddhism, this up-dated edition takes into account recent research to include the controversies over the date of the Buddha and current social and political developments in Sri Lanka. Gombrich explores the legacy of the Buddha's predecessors and the social and religious contexts against which Buddhism has developed and changed throughout history, demonstrating above all, how it has always influenced and been influenced by its social surroundings in a way which continues to this day.

Richard F. Gombrich is Academic Director of the Oxford Centre for Buddhist Studies, and one of the most renowned Buddhist scholars in the world. From 1976 to 2004 he was Boden Professor of Sanskrit, University of Oxford. He has been President of the Pali Text Society and was awarded the Sri Lanka Ranjana decoration by the President of Sri Lanka in 1994 and the SC Chakraborty medal by the Asiatic Society of Calcutta the previous year. He has written extensively on Buddhism, including How Buddhism Began: the Conditioned Genesis of the Early Teachings (Routledge 2005); and with Gananath Obeyesekere, Buddhism transformed: Religious change in Sri Lanka (1988).