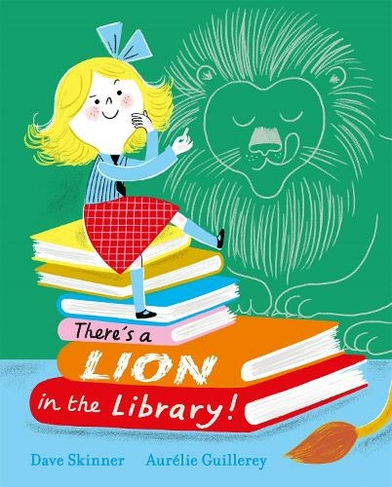 There's a Lion in the Library!

Little Lucy Lupin is sweet and dimpled - and a dreadful LIAR. The trouble is, it's impossible not to believe her - she's so perfectly cute. Not once, not twice, but three times the library is evacuated when Lucy says there's a terrifying lion on the loose. But what will happen when Lucy's lie comes true . . .? A hilarious reimagining of The Boy Who Cried Wolf - with a truly DELICIOUS twist!

Dave Skinner wrote and performed stand-up comedy throughout his twenties, while building a career in TV development. He had written, produced and developed a wide variety of shows, including working alongside some of the UK's best comedians. He is the co-creator, with artist Henry Paker, of two comedy books for grown-ups - Don't Arm Wrestle A Pirate: 101 Really Bad Ideas and Why Steve Was Late - as well as working as a voiceover artist. Dave lives in South Wales with his wife and two young children.Aurelie Guillerey studied at the Ecole Superieure des Arts Decoratifs in Strasbourg and has since published a string of bestselling titles, including Daddy Long Legs and Children Are Naughty. Her bright, retro artwork is inspired by the poster art of the 1950s and artists such as Sempe and Tomi Ungerer. In her native France, her designs feature on the popular toy range, Moulin Roty. Aurelie lives with her family in Rennes, France.