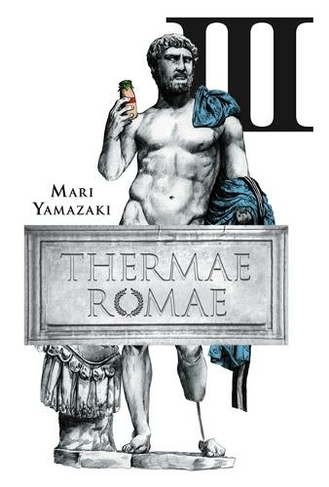 Though he has been trapped in the twenty-first century for several weeks, Lucius is still amazed at the wondrous innovations of the flat-faced people, and meeting Satsuki has given him an even greater understanding of the things he has seen - not to mention an undeniable flutter in his heart. But despite his curiosity for this land, Lucius worries at the amount of time that has passed since he left Rome. The political atmosphere was already tense after the death of the emperor's heir, and Lucius fears what may befall Rome and the ailing Hadrian in his absence. Yet matters are no less precarious in the hot-springs town of Ito. With aggressive developers bullying the established inns, Lucius may be called upon to save the sacred appreciation for the bath both in the past and in the present in this final volume of THERMAE ROMAE!

Mari Yamazaki was born in Tokyo on April 20, 1967. At age seventeen, she moved to Italy, where she started studying drawing at an art school in Florence. Yamazaki made her manga debut in 1996 with an autobiographical look at her life in Italy. After bouncing around between Japan, the Middle East, and Italy, she finally settled down in Lisbon, Portugal, in 2003. In 2008, she began drawing Thermae Romae for the monthly magazine Comic Beam on an irregular basis, and the first collected volume was a smash hit upon its 2009 release. In 2010, Thermae Romae received the Manga Taisho Award 2010 and the 14th Osamu Tezuka Cultural Prize, Short Story Award. Mari Yamazaki currently lives in Chicago with her Italian husband and their son.