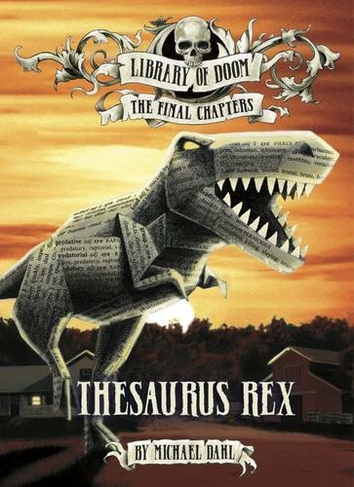 One night, a young student's thesaurus disappears from her bedroom. A trail of slimy footprints leads to the bedroom window, so she looks outside and sees the thesaurus down below in the grass. Then, suddenly, a colossal monster unfolds itself from the pages of the thesaurus like an origami creation gone terribly wrong. Soon, it towers above the family's house, constantly changing its form and sprouting a new weapon with each transformation! Who could possibly defeat this shape-shifting monster made of synonyms? This reading experience is complete with non-fiction back matter, including discussion questions, writing prompts, and glossaries, these mysteries are as educational as they are enthralling.

Michael Dahl is the prolific author of the bestselling Goodnight, Baseball picture book and more than 200 other books for children and young adults. He has won the AEP Distinguished Achievement Award three times for his nonfiction, a Teacher's Choice award from Learning magazine, and a Seal of Excellence from the Creative Child Awards. And he has won awards for his board books for the earliest learners, Duck Goes Potty and Bear Says "Thank You!" Dahl has written and edited numerous graphic novels for younger readers, authored the Library of Doom adventure series, the Dragonblood books, Trollhunters, and the Hocus Pocus Hotel mystery/comedy series. Dahl has spoken at schools, libraries, and conferences across the US and the UK, including ALA, AASL, IRA, and Renaissance Learning. He currently lives in Minneapolis, Minnesota in a haunted house. Bradford Kendall has enjoyed drawing for as long as he can remember. As a boy, he loved to read comic books and watch old monster movies. He graduated from the Rhode Island School of Design with a BFA in Illustration. He has owned his own commercial art business since 1983. Bradford lives in Providence, Rhode Island with his wife, Leigh, and their two children, Lily and Stephen.