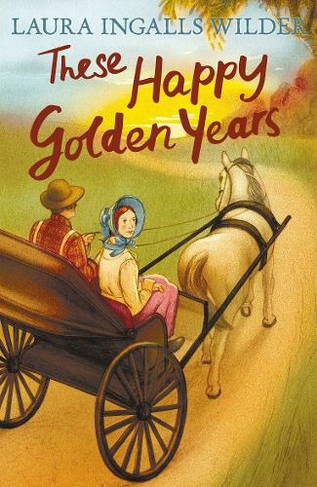 Classic tales by Laura Ingalls Wilder about life on the frontier and America's best-loved pioneer family. Teaching at the Brewster settlement, miles away from her family, isn't as exciting as Laura Ingalls had hoped and she is very homesick. The winter passes slowly and she has only rare drives in Almanzo Wilder's new pony trap to look forward to. As Laura leaves her childhood behind and turns to the responsibilities of earning her keep, her friendship with Almanzo blossoms into love and we say goodbye to the Ingalls family with a wedding. The timeless stories that inspired a TV series can now be read by a new generation of children. Readers who loved Anne of Green Gables, Little Women, and Heidi will be swept up by this timeless rural coming of age saga. Perfect escapism for readers aged 8+. Beautifully illustrated by Garth Williams. Have you collected all the Little House books? Little House in the Big Woods Little House on the Prairie On the Banks of Plum Creek By the Shores of Silver Lake The Long Winter Little Town on the Prairie These Happy Golden Years Laura Ingalls Wilder was born in Wisconsin in 1867. She recorded her adventurous nomadic childhood with her pioneer family in a collection of books that have become beloved classics of American literature. The Little House on the Prairie television series ran for 9 seasons from 1974-1983.

Laura Ingalls Wilder was born in Wisconsin in 1867. Her family moved around, travelling from Missouri to Kansas, Minnesota and back to Wisconsin. Eventually the family settled in De Smet, Dakota Territory and Laura worked regularly as a seamstress and teacher. She stopped working when she married Almanzo Wilder in 1885.Little House in the Big Woods was first published in 1932, Little House on the Prairie in 1935, and five more books in the Little House series followed. Laura also wrote Farmer Boy about her husband's childhood, and three more books were published posthumously.Laura was five times the recipient of the Newbery Honor Award for her distinguished contribution to American literature for children: On the Banks of Plum Creek (1938), By the Shores of Silver Lake (1940), The Long Winter (1941), Little Town on the Prairie (1942), These Happy Golden Years (1944). The books are charmingly illustrated with Garth Williams' black and white drawings from the 1953 editions.