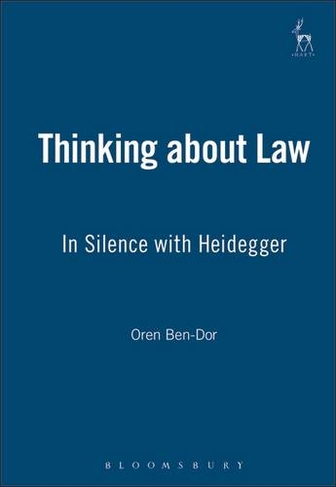 Thinking About Law: In Silence with Heidegger

What calls for thinking about law? What does it mean to think about? What is aboutness? Could it be that law, in its essence, has not yet been thought about? In exploring these questions, this book closely reads Heidegger's thought, especially his later poetical writings. Heidegger's transformation of the very notion and process of thinking has destabilising implications for the formation of any theory of law, however critical this theory may be. The transformation of thinking also affects the notions of ethics and morality, and the manner in which law relates to them. Interpretations of Heidegger's unique understanding of notions such as 'essence', 'thinking', 'language', 'truth' and 'nearness' come together to indicate the otherness of the essence of law from what is referred to as the 'legal'. If the essence of law has not yet been thought about, what generates deafness to the call for such thinking, thereby entrenching a refuge for legalism? The ambit of the legal is traced to Levinasian ethics, especially to his notion of otherness, despite such a notion being apparently highly critical of the totality of the legal. In entrenching the legal, it is argued that Levinas's notion of otherness does not reflect thinking that is otherwise than ontology but rather radicalises and maintains a derivative ontology. A call for thinking about law is then connected to Heideggerian ontologically based otherness upon which ethical reflection, that the essence of law protects, is grounded.

Oren Ben-Dor teaches legal and political philosophy at the School of Law, University of Southampton. He is the author of Constitutional Limits and the Public Sphere, Hart Publishing, 2000.