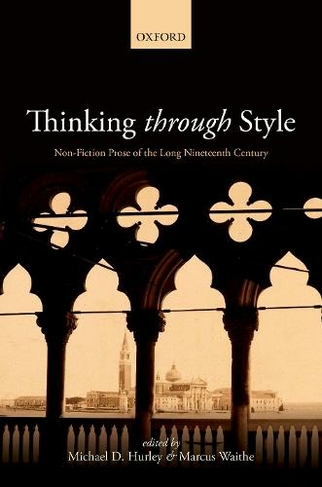 Thinking Through Style: Non-Fiction Prose of the Long Nineteenth Century

Also available on eBook for £53.63. Click here to purchase from Rakuten Kobo

What is 'style', and how does it relate to thought in language? It has often been treated as something merely linguistic, independent of thought, ornamental; stylishness for its own sake. Or else it has been said to subserve thought, by mimicking, delineating, or heightening ideas that are already expressed in the words. This ambitious and timely book explores a third, more radical possibility in which style operates as a verbal mode of thinking through. Rather than figure thought as primary and pre-verbal, and language as a secondary delivery system, style is conceived here as having the capacity to clarify or generate thinking. The book's generic focus is on non-fiction prose, and it looks across the long nineteenth century. Leading scholars survey twenty authors to show where writers who have gained reputations as either 'stylists' or as 'thinkers' exploit the interplay between 'the what' and 'the how' of their prose. The study demonstrates how celebrated stylists might, after all, have thoughts worth attending to, and that distinguished thinkers might be enriched for us if we paid more due to their style. More than reversing the conventional categories, this innovative volume shows how 'style' and 'thinking' can be approached as a shared concern. At a moment when, especially in nineteenth-century studies, interest in style is re-emerging, this book revaluates some of the most influential figures of that age, re-imagining the possible alliances, interplays, and generative tensions between thinking, thinkers, style, and stylists. 1 Illustration

Michael D. Hurley teaches English at the University of Cambridge, where he is a University Lecturer and a Fellow of St Catharine's College. He has written widely on literary style and its relationship with feeling and thinking. His books include Faith in Poetry: Verse Style as a Mode of Religious Belief (Bloomsbury, 2017), G. K. Chesterton (Northcote House, 2012), and (co-authored with Michael O'Neill) Poetic Form (CUP, 2012).Marcus Waithe is a Fellow in English and University Senior Lecturer at Magdalene College, Cambridge. He is the author of William Morris's Utopia of Strangers: Victorian Medievalism and the Ideal of Hospitality (2006), and of numerous essays and articles on Victorian and twentieth-century topics. A collection of essays, co-edited with Claire White, entitled The Labour Literature in Britain and France, 1830-1930: Authorial Work Ethics is forthcoming with Palgrave. He is alsocompleting a monograph entitled The Work of Words: Literature and the Labour of Mind in Britain, 1830-1930.