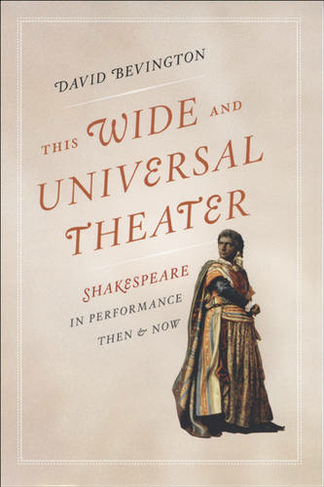 This Wide and Universal Theater Shakespeare in Performance, Then and Now

Many readers first encounter Shakespeare's plays in a book rather than a theater. Yet Shakespeare was through and through a man of the stage. So what do we lose when we leave Shakespeare the practitioner behind, and what do we learn when we think about his plays as dramas to be performed? David Bevington answers these questions with "This Wide and Universal Theater", which explores how Shakespeare's plays were produced both in his own time and in succeeding centuries. Making use of historical documents and the play scripts themselves, Bevington brings Shakespeare's original stagings to life. He explains how the Elizabethan playhouse conveyed a sense of place using minimal scenery, from the Forest of Arden in "As You Like It" to the tavern in "Henry IV, Part I". Moving beyond Shakespeare's lifetime, Bevington shows the prodigious lengths to which eighteenth- and nineteenth-century companies went to produce spectacular effects, from flying witches in "Macbeth" to terrifying storms punctuating "King Lear". To bring the book into the present, Bevington considers recent productions on both stage and screen, when character and language have taken precedence over spectacle. This volume brings a lifetime of study to bear on a remarkably underappreciated aspect of Shakespeare's art. 53 halftones

David Bevington is the Phyllis Fay Horton Distinguished Service Professor Emeritus in the Humanities at the University of Chicago, where he has taught since 1967. The author of numerous books, he is also the editor of the twenty-nine volumes of The Bantam Shakespeare and The Complete Works of Shakespeare.