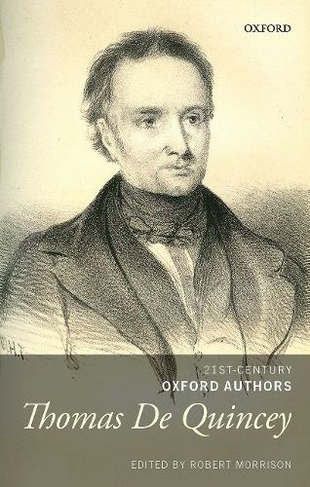 This volume in the 21st Century Oxford Authors series offers students an authoritative, comprehensive selection of the work of Thomas De Quincey (1785-1859). The edition presents De Quincey's work in all of its rich variety, and offers the most thorough and accurate annotation of De Quincey's major works ever compiled. Thomas De Quincey: 21st-Century Oxford Authors is the most comprehensive selection of De Quincey's writings published in decades, and includes all the essays that made him a major figure in his own age, and that give him a burgeoning relevance in ours. The volume features complete versions of his three most famous works of impassioned autobiography-Confessions of an English Opium-Eater (1821), Suspiria de Profundis (1845), and 'The English Mail-Coach' (1849)-as well as a great deal of manuscript material related to these works, and an extensive selection from his revised version of the Confessions (1856). It contains all three of his essays 'On Murder Considered as One of the Fine Arts' (1827, 1839, and 1854), the first two instalments of which are brilliant exercises in satirical high jinks, and the final instalment of which is a graphic account of the notorious Radcliffe Highway killings of 1811. It features lengthy excerpts from De Quincey's biographical recollections of 'Samuel Taylor Coleridge' (1834) and 'William Wordsworth' (1839), both of whom De Quincey admired intensely, though his personal relationship with both poets eventually collapsed into bitterness and self-justification. It features De Quincey's finest pieces of literary criticism, including 'On the Knocking at the Gate in Macbeth' (1823) and his two searching examinations of 'The Literature Knowledge and the Literature of Power' (1823 and (1848). The edition includes an Introduction to the life and works of De Quincey, and a Chronology, which enhance the study, understanding, and enjoyment of these works. 12 black-and-white halftones

Robert Morrison is British Academy Global Professor at Bath Spa University and Queen's National Scholar at Queen's University, Kingston, Ontario. He is the author of The Regency Revolution: Jane Austen, Napoleon, Lord Byron and the Making of the Modern World and The English Opium-Eater: A Biography of Thomas De Quincey, which was a finalist for the James Tait Black Prize. His annotated edition of Jane Austen's Persuasion was published byHarvard University Press. For Oxford World's Classics, he edited De Quincey's Confessions of an English Opium-Eater, as well as his three essays On Murder. With Chris Baldick, he co-edited The Vampyre and Other Tales of the Macabre and Tales of Terror from Blackwood`s Magazine in the same series.