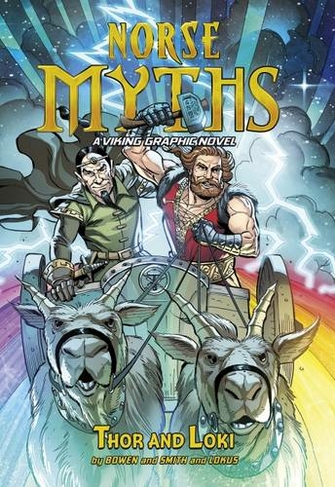 Loki, the god of mischief, is Thor's troublesome adopted brother. Their father Odin (ruler of the Viking gods), orders the quarrelsome siblings to tame the violent Giants once and for all together. But what Loki and Thor find in their series of adventures puts them in conflict with each other as well as with the giants. And in the land of Utgard, a mysterious place made from magic and illusion, Thor must trust his magic-wielding and misbehaving brother in order to get out alive. Likewise, Loki must count on his brother's unmatched strength if he, too, hopes to survive their encounters with the Giants.

Carl Bowen is a father, husband, and writer living in Lawrenceville, Georgia. He has published a handful of novels, short stories, and comics. For Stone Arch Books and Capstone, Carl has retold 20,000 Leagues Under the Sea (by Jules Verne), The Strange Case of Dr. Jekyll and Mr. Hyde (by Robert Louis Stevenson), The Jungle Book (by Rudyard Kipling), "Aladdin and His Wonderful Lamp" (from A Thousand and One Nights), Julius Caesar (by William Shakespeare), and The Murders in the Rue Morgue (by Edgar Allan Poe). Carl's novel, Shadow Squadron: Elite Infantry, earned a starred review from Kirkus Book Reviews.