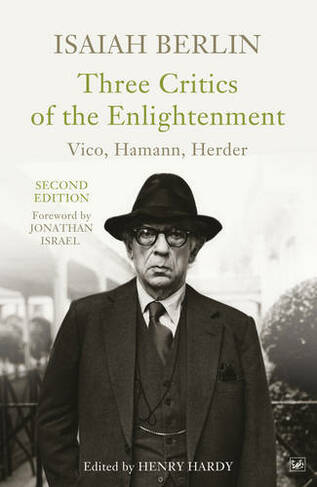 This book brings together three major studies from Isaiah Berlin's central intellectual project - to explain the opposition to the excessively scientistic French Enlightenment by getting under the skin of its critics and giving a sympathetic account of their views. The contributions of these particular critics could hardly be more important. Giambattista Vico estabished that the humanties are and must remain crucially different from the sciences: J G Herder - sometimes called the father of European nationalism - originated populism, expressionism and pluralism (an idea which Berlin enriched and made powerfully his own); and the anti-rationalist J.G. Hamann lit the fuse of romanticism, the major movement to arise out of the various currents of hostility to Enlightenment thought. The intellectual tension that existed between Enlightenment advocates and these critics is as crucial today as it was at its inception. With his customary humane understanding, Berlin analyses the ideas of three deeply original but often neglected thinkers, and demonstrates their disturbing relevance to the central issues of today's world. This new edition includes three previously uncollected pieces on Vico, an interesting passage excluded from the first edition of the essay on Hamann, and Berlin's thoughtful letters responding to two reviewers of that same edition.

Isaiah Berlin was born in Riga, now capital of Latvia, in 1909. When he was six, his family moved to Russia, and in Petrograd in 1917 Berlin witnessed both Revolutions - Social Democratic and Bolshevik. In 1921 he and his parents emigrated to England, where he was educated at St Paul's School, London, and Corpus Christi College, Oxford. Apart from his war service in New York, Washington, Moscow and Leningrad, he remained at Oxford thereafter - as a Fellow of All Souls, then of New College, as Chichele Professor of Social and Political Theory, and as founding President of Wolfson College. He also held the Presidency of the British Academy. His published work includes Karl Marx, Russian Thinkers, Concepts and Categories, Against the Current, Personal Impressions, The Sense of Reality, The Proper Study of Mankind, The Roots of Romanticism, The Power of Ideas, Three Critics of the Enlightenment, Freedom and Its Betrayal, Liberty, The Soviet Mind and Political Ideas in the Romantic Age. As an exponent of the history of ideas he was awarded the Erasmus, Lippincott and Agnelli Prizes; he also received the Jerusalem Prize for his lifelong defence of civil liberties. He died in 1997.