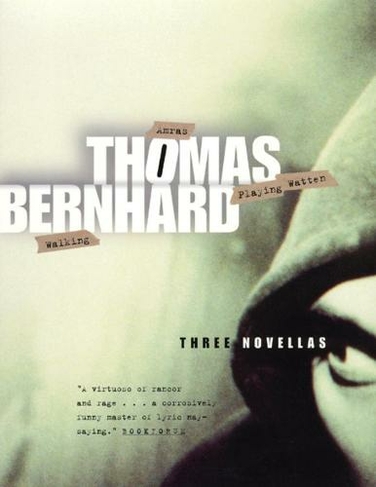 Thomas Bernhard is "one of the masters of contemporary European fiction" (George Steiner); "one of the century's most gifted writers" (New York Newsday); "a virtuoso of rancor and rage" (Bookforum). His evocations and descriptions of the constant psychic crisis brought on by modern life have earned him favourable comparison to Franz Kafka, Samuel Beckett and Robert Musil, yet Bernhard is still not as widely read in the United States as he deserves to be. Uninitiated readers should consider "Three Novellas" a passport to the absurd, bleak and uncommonly comic world of Bernhard. Two out of the three novellas here have never before been published in English, and they contain all of the touchstones of Bernhard's work - illness and madness, isolation, tragic friendships, and dark humour. "Amras", one of Bernhard's earliest works, tells the story of two brothers, one epileptic, who have survived a family suicide pact and are now living in a ruined tower, struggling with madness, trying either to come fully back to life or finally die. In "Playing Watten", the narrator, a doctor who lost his practice due to morphine abuse, describes a visit paid him by a truck driver who wanted the doctor to return to his habit of playing cards ("watten") every Wednesday - a habit that the doctor had interrupted when one of the players killed himself. The last novella, "Walking", records the conversations of the narrator and his friend Oehler while they walk, discussing anything that comes to mind but always circling back to their mutual friend Karrer, who has gone irrevocably mad. Perhaps the most overtly philosophical work in Bernhard's highly philosoph

Thomas Bernhard (1931-1989) grew up in Salzburg and Vienna, where he studied music. In 1957 he began a second career as a playwright, poet, and novelist. He went on to win many of the most prestigious literary prizes of Europe (including the Austrian State Prize, the Bremen and Br chner prizes, and Le Prix S guier), became one of the most widely admired writers of his generation, and insisted at his death that none of his works be published in Austria for seventy years, a provision later repealed by his half-brother. The University of Chicago Press has published eleven of his books in English translation, including, most recently, Extinction, The Loser, and The Voice Imitator.