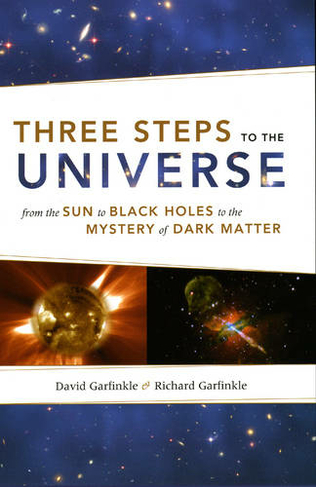 If scientists can't touch the Sun, how do they know what it's made of? And if we can't see black holes, how can we be confident they exist? Gravitational physicist David Garfinkle and his brother, science fiction writer Richard Garfinkle, tackle these questions and more in "Three Steps to the Universe", a tour through some of the most complex phenomena in the cosmos and an accessible exploration of how scientists acquire knowledge about the universe through observation, indirect detection, and theory. From the Sun and black holes, the authors lead us further into the unknown, to the dark matter and energy that pervade our universe, where science teeters on the edge of theory and discovery. Returning from the depths of space, the final section of the book brings readers back down to Earth for a final look at the practice of science, ending with a practical guide to discerning real science from pseudoscience among the cacophony of print and online scientific sources. "Three Steps to the Universe" will reward anyone interested in learning more about the universe around us and shows how scientists uncover its mysteries. 13 halftones

David Garfinkle is professor in the Department of Physics at Oakland University. Richard Garfinkle is the author of two books of science fiction, Celestial Matters and All of an Instant.