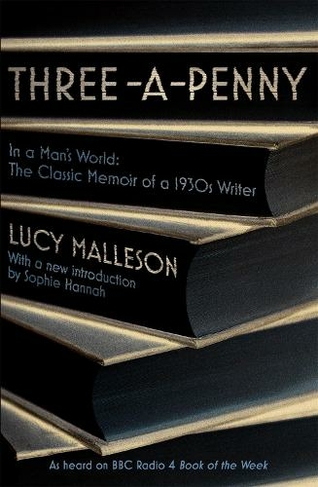 Three-a-Penny: Radio 4 Book of the Week

A rediscovered classic memoir - a fascinating insight into the life of a crime writer during and after the First World War - a woman ahead of her time. With a new introduction by Sophie Hannah THREE-A-PENNY describes what it is like to be a woman in a man's world - about the ups and downs of earning a living as a writer in the 1920s and 30s. Lucy Malleson wrote over 70 crime novels and was part of what is often referred to as the Golden Age of crime writing. But in order to be published she used a male pseudonym, and successfully concealed her true identity for many years. From the poignancy of the First World War and its aftermath to the invitation to join the infamous Detection Club, this re-discovered classic gives a fascinating insight into what life was like as a woman living and working in a largely male world during and after the First World War.

Lucy Beatrice Malleson was born in Upper Norwood, a suburb of London, on February 15, 1899. Her father was a stockbroker, and she was educated at St. Paul's Girls' School in Hammersmith. During World War I, Malleson's father lost his job, and although her mother wanted her to train as a teacher, Malleson learned secretarial skills so that she could earn an immediate income for the family. From the age of seventeen onwards, she wrote verse and short pieces for Punch and various literary weekly publications. During her early years as a secretary, she began to produce novels. Her first crime novel was published in 1927 under the pseudonym Anthony Gilbert, and she went on to write over 70 novels as well as a number of radio plays for the BBC. She valued her privacy and for many years successfully concealed her identity as the writer of the Gilbert novels. Malleson's novels often evince a liberal - often feminist - social consciousness and great empathy for the down-and-out and socially marginalised. She lived in or around London for most of her life, and died in 1973.