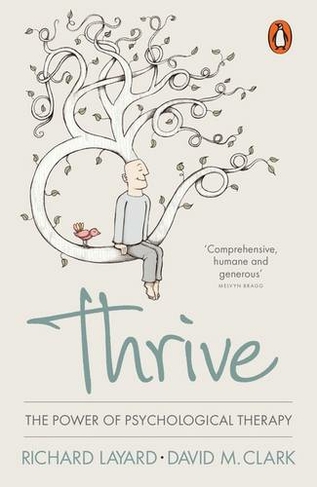 Thrive: The Power of Psychological Therapy

A ground-breaking argument for better treatment of mental health from Richard Layard (author of Happiness) and David M. Clark. Britain has become a world leader in providing psychological therapies thanks to the work of Richard Layard and David Clark. But, even so, in Britain and worldwide the majority of people who need help still don't get treatment. This is both unjust and a false economy. This book argues for change. It shows that mental ill-health causes more of the suffering in our society than physical illness, poverty or unemployment. Moreover, greater spending on helping people to recover from mental health problems - and stay well - would generate massive savings to national economies, as those who suffer from depression and anxiety disorders account for nearly a half of all disability and are predominantly of working age. Modern talking therapies, such as CBT (Cognitive Behavioural Therapy), are highly effective, and if more sufferers got these treatments, lives would be turned around and the cost would be fully covered by the huge savings. Thrive explores the new effective solutions to the misery and injustice caused by mental illness. It describes how successful psychological treatments have been developed and explains what works best for whom. It also urges us to do all we can to prevent these problems in the first place, through better schools and a better society. And, most importantly, it offers real hope. 'This book is an inspiring success story and a stirring call to further action. Its message is as compelling as it is important: the social costs of mental illness are terribly high and the costs of effective treatments are surprisingly low' Daniel Kahneman 'Extremely easy and pleasurable to read. It's the most comprehensive, humane and generous study of mental illness that I've come across' Melvyn Bragg 'Remarkable . . . presents the issues in a style that easy for the professional, the general public, and policy makers to understand' Aaron T Beck 'Professors Layard and Clark (the Dream Team of British Social Science) make a compelling case for a massive injection of resources into the treatment and prevention of mental illness. This is simply the best book on public policy and mental health ever written' Martin Seligman RICHARD LAYARD is one of the world's leading labour economists, and in 2008 received the IZA International Prize for Labour Economics. A member of the House of Lords, he has done much to raise the public profile of mental health. His 2005 book Happiness has been translated into 20 languages. DAVID M. CLARK, Professor of Psychology at Oxford, is one of the world's leading experts on CBT, responsible for much progress in treatment methods. With Richard Layard, he was the main driver behind the UK's Improving Access to Psychological Therapies programme.

RICHARD LAYARD is one of the world's leading labour economists, and in 2008 received the International Prize for Labour Economics. A member of the House of Lords, he has done much to raise the public profile of mental health. His 2005 book Happiness has been translated into 20 languages.DAVID M. CLARK, Professor of Psychology at Oxford, is one of the world's leading experts on CBT, responsible for much progress in treatment methods. With Richard Layard, he was the main driver behind the UK's Improving Access to Psychological Therapies programme.