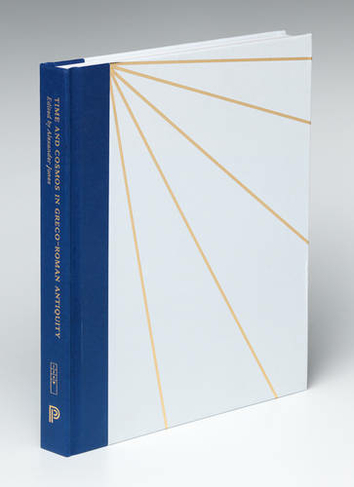 Time and Cosmos in Greco-Roman Antiquity

The Greeks and Romans lived according to a distinctively Hellenic conception of time as an aspect of cosmic order and regularity. Appropriating ideas from Egypt and the Near East, the Greeks integrated them into a cosmological framework governed by mathematics and linking the cycles of the heavenly bodies to the human environment. From their cosmology they derived instruments for measuring and tracking the passage of time that were sophisticated embodiments of scientific reasoning and technical craft, meant not solely for the study of specialists and connoisseurs but for the public gaze. Time and Cosmos in Greco-Roman Antiquity, the accompanying catalogue for the exhibition at the Institute for the Study of the Ancient World, New York University, explores through thematic essays and beautiful illustrations the practical as well as the artistic, ideological, and spiritual role of time technology and time imagery in the Mediterranean civilizations. Highlights among the more than one hundred objects from the exhibition include marvelously inventive sundials and portable timekeeping devices, stone and ceramic calendars, zodiac boards for displaying horoscopes, and mosaics, sculptures, and coins that reflect ancient perceptions of the controlling power of time and the heavens. Contributors include James Evans, Dorian Gieseler Greenbaum, Stephan Heilen, Alexander Jones, Daryn Lehoux, Karlheinz Schaldach, John Steele, and Bernhard Weisser. Exhibition Dates: October 19, 2016-April 23, 2017 Cover photograph (c) Bruce M. White, 2016 145 color illus.

Alexander R. Jones is professor of the history of the exact sciences in antiquity at the Institute for the Study of the Ancient World at New York University. A leading expert on ancient science, he has written many books and articles on astronomy, mathematics, and related scientific traditions in the Greco-Roman world and the ancient Near East.