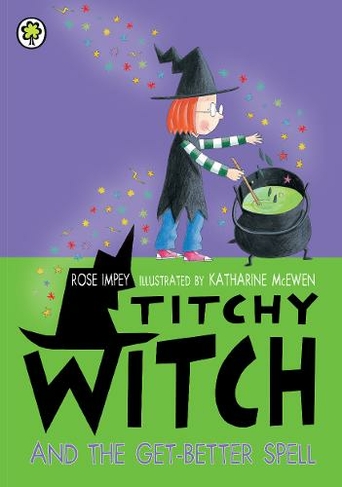 Titchy Witch And The Get-Better Spell

When Titchy-witch's mum has the witchy-flu, Cat-a-bogus makes a big pot of Get-Better Soup. But Titchy-witch thinks a Get-Better Spell will do more good! Don't miss the rest of the Titchy-witch series, now reissued in a smart new livery. Colour illustrations throughout

Rose Impey, a former teacher, is highly regarded as a writer for children of all ages. She has written several novels and many bestselling series for Orchard, including Titchy Witch and Animal Crackers. Rose is also the creator of the bestselling Sleepover Club books, which became a major children's television series. Katharine McEwen has been illustrating since graduating from Kingston University in 1996. To date she has illustrated around 40 titles and is fortunate to have worked with some fantastic authors, such as Allan Ahlberg, Michael Rosen and Giles Andreae. She is currently embarking on becoming an authorstrator (or should that be illustrauthor?!), but finds the writing part enjoyable, but very tricky!When not illustrating books, Katharine attempts to throw pots (in a making them way, not an angry way) and is endeavouring to get better at it. She also loves a good movie, rummaging in a junk shops, chin-wagging with her chums and taking photographs.