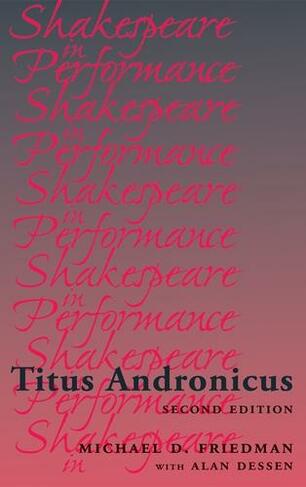 Michael D. Friedman's second edition of this stage history of Shakespeare's Titus Andronicus adds an examination of twelve major theatrical productions and one film that appeared in the years 1989-2009. Friedman identifies four lines of descent in the recent performance history of the play: the stylised, realistic, darkly comic, and political approaches, which culminate in Julie Taymor's harrowing film Titus (1999). Aspects of Taymor's eclectic vision of ancient Rome under the grip of modern fascism were copied by several subsequent productions, making Titus the most characteristic, as well as the most influential, contemporary performance of the play. Friedman's work extends Alan Dessen's original study to include Taymor's film, along with chapters devoted to the efforts of international directors including Gregory Doran, Silviu Purcarete, and Yukio Ninagawa. -- . 21 black & white illustrations

Michael D. Friedman is a Professor of English in the McDade Center for Literary and Performing Arts at the University of Scranton -- .