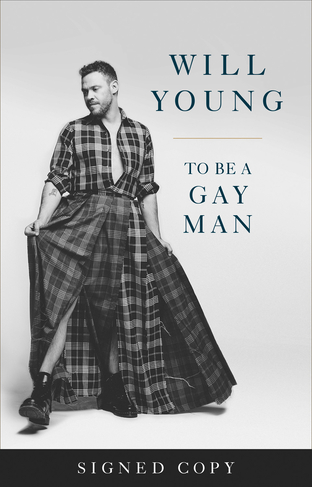 To be a Gay Man (Signed Edition)

Order now for a limited edition copy of To Be a Gay Man signed by Will Young.

Will Young's journey to becoming a happily open gay man has been set back by damaging stigma, hurtful experiences, and the inner shame that comes from a society that still portrays homosexuality as "wrong" or "other". From the word "gay" being used as an insult on the playground to horrific homophobic attacks such as the 1999 nail bomb attack on one of Soho's oldest gay pubs; Will has grown up surrounded with messages that his true self is not accepted.

Now in a book that is part self-help guide and part memoir, Will shares his experiences, regrets and darkest moments with honesty in the hopes that it will help someone going through similar struggles. Covering the long-lasting impact of repressing his true self for so long, internalised shame, low self-worth, self-disgust, destructive behaviours, homophobia, "gay shame" and the pain of going through it all alone; Will provides an important insight into some of the psychological issues that can affect the LGBTQ+ community both before and after coming out.

Breaking down taboos and providing practical advice, Will offers himself as a friend, champion and mentor to those who can relate to his experiences and those still struggling with acceptance.