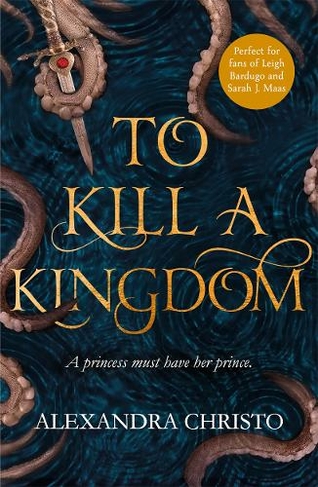 To Kill a Kingdom

By Alexandra Christo (Author)
Paperback
To Kill a Kingdom is rated 4.6 out of 5 by 16.
https://www.whsmith.co.uk/products/to-kill-a-kingdom/alexandra-christo/paperback/9781471407390-12-000.html £6.55 rrp £7.99 Save £1.44 (18%)
GBP
Availability
In Stock
Free Delivery Available When You Spend £25 Or More
Details
Spend £25 on eligible products to receive free standard delivery to home or free next working day click and collect to store
Share

Dark and romantic YA fantasy for fans of Sarah J Maas - about the siren with a taste for royal blood and the prince who has sworn to destroy her. Princess Lira is siren royalty and the most lethal of them all. With the hearts of seventeen princes in her collection, she is revered across the sea. Until a twist of fate forces her to kill one of her own. To punish her daughter, the Sea Queen transforms Lira into the one thing they loathe most - a human. Robbed of her song, Lira has until the winter solstice to deliver Prince Elian's heart to the Sea Queen or remain a human forever. The ocean is the only place Prince Elian calls home, even though he is heir to the most powerful kingdom in the world. Hunting sirens is more than an unsavoury hobby - it's his calling. When he rescues a drowning woman in the ocean, she's more than what she appears. She promises to help him find the key to destroying all of sirenkind for good. But can he trust her? And just how many deals will Elian have to barter to eliminate mankind's greatest enemy?

Alexandra Christo decided to write books when she was four and her teacher told her she couldn't be a fairy. She has a BA in Creative Writing and works as a copywriter in London, both of which make her sound more grown up than she feels. When she's not busy making up stories, she can be found buying far too many cushions and organizing food crawls all over the city. Alexandra currently lives in Hertfordshire with an abundance of cacti (because they're the only plants she can keep alive).Follow her on Twitter: @alliechristo and Instagram: alexandrachristowrites