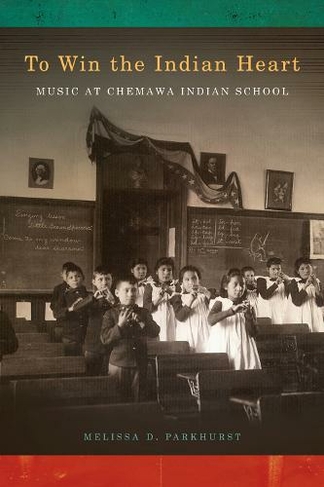 By Melissa D. Parkhurst (Author)
Paperback
https://www.whsmith.co.uk/products/to-win-the-indian-heart-music-at-chemawa-indian-school-first-peoples-new-directions-in-indigenous-st/melissa-d-parkhurst/paperback/9780870717383-01-000.html £22.50
GBP
Availability
Currently unavailable. We don't know when or if this item will be back in stock
Share

Since 1879, Indian children from all regions of the United States have entered federal boarding schools-institutions designed to assimilate them into mainstream society. Chemawa Indian School in western Oregon, one of the nation's oldest and the longest still in continuous operation, is an emblem of a system that has intimately impacted countless lives and communities. In To Win the Indian Heart: Music at Chemawa Indian School, Melissa Parkhurst records the history of the school's musical life. She explores the crucial role music was meant to play in the total transformation of Indian children, and the cultural recovery and resiliency it often inspired instead. Parkhurst chronicles the complex ways in which students, families, faculty, and administrators employed music, both as a tool for assimilation and, conversely, as a vehicle for student resistance-a subject long overlooked in literature on Indian education and the assimilation campaign. Combining oral histories of Chemawa alumni with archival records of campus life, the book examines the prominent forms of music making at Chemawa-school band, choirs, private lessons, pageants, dance, garage bands, and powwows. Parkhurst traces the trajectory of federal Indian policy, highlighting students' creative responses and the ways in which music reveals the inherent contradictions in the U.S. government's assimilation practices. Black & white photographs

Melissa D. Parkhurst is an instructor of music at Pacific University in Forest Grove, Oregon, USA, where she teaches courses on World Music and Music History. She earned a doctorate in ethnomusicology from the University of Wisconsin-Madison, USA. Her current research interests include First Nations music in the Pacific Northwest, how music promotes personal and community resilience, and the role of music in cultural revitalization