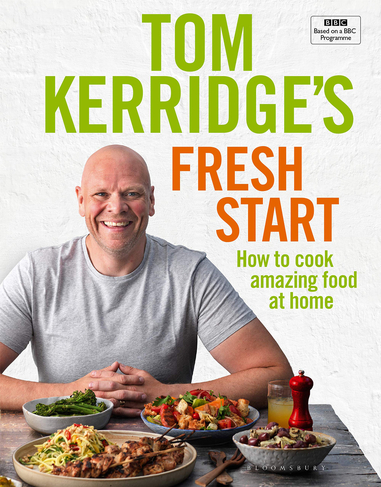 Tom Kerridge's Fresh Start: Eat well every day with all the recipes from Tom's BBC TV series and more

By Tom Kerridge (Author)
Hardback
£20.80 rrp £26.00 Save £5.20 (20%)
GBP
Availability
In Stock
Free Delivery Available When You Spend £25 Or More
Details
Spend £25 On Products To Receive Free Standard Delivery To Your Home Or Free Next Day Click and Collect To Stores

Tom Kerridge shows you how to be the boss in the kitchen and eat well every day, thanks to more than 100 brilliant recipes to cook from scratch at home and give your family a fresh start. What's for dinner tonight? Recycle that takeaway menu, step away from the microwave and make the most of the amazing British produce with some real home-cooked food! Tuck into a quick peanut chicken stir-fry or flavour-packed butternut squash and chickpea curry. At the weekend, Tom's Greek-style roast lamb makes the perfect family feast, and why not get the kids involved in the cooking too? It's very easy to fall into the busy-life trap, especially when ready meals are so convenient. But Tom Kerridge has learnt from experience how important it is to take control over what you eat for the sake of your health and happiness. Now he wants to show you how easy it is to cook amazing meals at home by sharing simple tricks and tips like batch cooking and using plenty of storecupboard ingredients. Tom Kerridge's Fresh Start is not a diet book, but it is about taking control. If you cook from scratch, you know exactly what is going into your food and can take responsibility for everything that you and your family eat. And with Tom's guidance, you know it will taste amazing too! Including more than 100 delicious recipes for breakfast, quick and easy meals, lighter dishes, veggie suppers, batch cooking, weekend feasts and sweet treats. 'Tom is the perfect person to kick us into a fresh start this new year' GQ Get ready for Tom's new book, Lose Weight & Get Fit - coming this December. Colour photography throughout

Tom Kerridge worked as a chef in restaurants across Britain before deciding to set out on his own and take over a rundown pub in the quiet Buckinghamshire town of Marlow. He opened The Hand & Flowers with his wife Beth in 2005, and it went on to become the first (and only) pub in the world to acquire two Michelin stars. In 2014 he opened a second pub in Marlow, The Coach. As well as hosting two of his own BBC television series, Tom has been at the helm of the BBC's Food & Drink and Bake Off: Creme de la Creme. His previous books include Proper Pub Food, Tom Kerridge's Best Ever Dishes, Tom's Table and the bestselling Tom Kerridge's Dopamine Diet and Lose Weight for Good. @ChefTomKerridge / tomkerridge.com