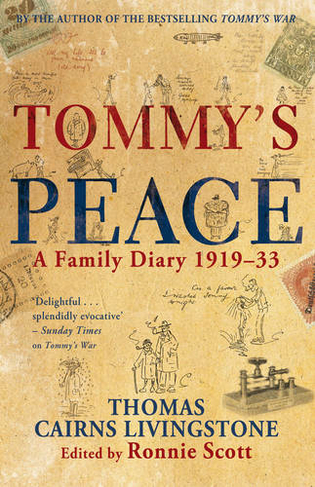 Thomas Cairns Livingstone began to note his day-to-day experiences in 1913 and continued faithfully for the next 20 years. With each witty and well-observed entry, he recorded events at home and abroad through times of war and peace, joy and sadness. In this follow-up to the acclaimed Tommy's War, the focus is on the post-war years. Alongside engaging, warm-hearted recollections of everyday life with his wide circle of family, neighbours and friends, Thomas documents everything from the lingering effects of the war and post-war politics to cultural and social aspects of the era, including the rise of cinema and radio, the standard of dentists and opticians before the NHS, the partition of Ireland, the General Strike, the division of domestic labour, Clyde coastal holidays and the expansion of Glasgow. Yet, above all, Thomas affectionately chronicles family life with his hard-working wife, Agnes, and writes with pride of his clever young son, Tommy. Illustrated throughout with black-and-white sketches from Thomas' original diaries and various other artefacts from the period, Tommy's Peace is a tremendous document of a bygone era that vividly evokes family life in Glasgow between the wars. Integrated b/w illus + colour section

Thomas Cairns Livingstone was born in Glasgow in 1882 and died in 1964, having spent his whole life in the city, living in Rutherglen, Bridgeton and Govanhill. He worked as a mercantile clerk and was happily married to Agnes until her death, in 1950. They had one son, Tommy, who later graduated from and taught at the University of Glasgow. Ronnie Scott is a cultural historian, writer and editor, with a particular interest in the history of Glasgow. He is the editor of Tommy's War and the author of Death by Design: The True Story of the Glasgow Necropolis. He also teaches at the universities of Glasgow and Strathclyde. Shaun Sewell is an avid antiques dealer who spotted Thomas Cairns Livingstone's diaries in a shoebox at an auction. Captivated by the author's wit, his skilled illustrations and the vivid picture he painted of daily life during the First World War, Shaun bought the diaries and later presented them on the BBC's Antiques Roadshow. He lives in Northumberland with his partner, Joan, and his faithful cats.