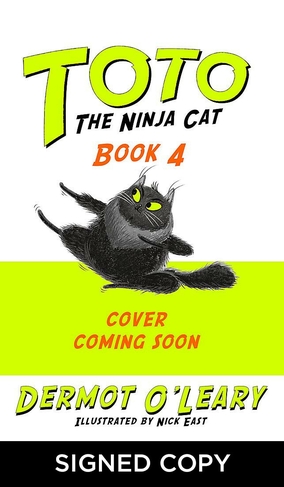 By Dermot O'Leary (Author), Nick East (Illustrator)
https://www.whsmith.co.uk/products/toto-the-ninja-cat-and-the-mystery-jewel-thief-book-4-signed-edition/dermot-oleary/nick-east/hardback/9781444960907-03-000.html £7.99 rrp £9.99 Save £2.00 (20%)
GBP
Availability
In Stock
Free Delivery Available When You Spend £25 Or More
Details
Spend £25 On Eligible Products To Receive Free Standard Delivery To You Home Or Free Next Working Day Click And Collect To Store
Share

Toto is no ordinary cat, and she can't wait for you to join her on her FOURTH ninja adventure! From one of the UK's best-loved broadcasters, purrfect for fans of The Aristocats, The Secret Life of Pets and Atticus Claw Breaks the Law. Toto and her friends are due to be looking after the French ambassador on a day of sightseeing, finishing at the Tower of London to see the animal world's crown jewels: a sacred diamond cat collar. But when they arrive, the collar has disappeared - and what's worse, it looks like Toto's boss Larry is responsible, with Toto as his accomplice! Toto is almost arrested, but she escapes to try and get to the bottom of the mystery and clear her name. She and her friends will have to follow some strange clues that will take them to a secret bookshop, Buckingham Palace and the rats' underground city in the sewers... Can they defeat an unexpected villain and bring the thief to justice? Ideal for reading aloud or for children to curl up with and read alone, the story features brilliant black and white illustrations throughout. With gentle themes of friendship, inclusivity and winning in the face of adversity, this is a hilarious must-read for all animal-loving kids!

Dermot O'Leary (Author) Dermot started his career on T4 for Channel 4 and has presented shows for both ITV and the BBC. His best-known work includes The X Factor, Big Brother's Little Brother, Unicef's Soccer Aid, BBC3's First Time Voters Question Time, the RTS Award winning 'Live from Space' season and the Brit Awards which he presented in 2016.2017 saw Dermot launch his new Saturday morning show on BBC Radio 2, 'Saturday Breakfast with Dermot O'Leary'. Previously in the Saturday afternoon slot, 'The Dermot O'Leary Show' won three Sony Radio Awards and was well known for its support of new and emerging bands.In 2018 he joined Kirsty Young and Huw Edwards to host the BBC's coverage of the Royal Wedding in front of an audience of 13 million people. In 2019 Dermot hosted his tenth and final National Television Awards and presented the Explorers episodes of the BBC's 'Icons: The Greatest Person of the 20th Century'.Toto the Ninja Cat and the Superstar Catastrophe is Dermot's third children's book. He lives in London with his wife Dee and their cats Socks and, of course, Toto.You can find Dermot on Twitter and Instagram - @radiolearyNick East (Illustrator) Nick East is the illustrator of the bestselling Toto the Ninja Cat as well as the Goodnight Digger and Knock Knock series. He worked for many years as a museum designer but has always been a storyteller, whether as a child, filling sketchbooks with quirky characters, or as a designer displaying a collection of ancient artefacts. Nick lives near York with his wife and two children and, when not writing or drawing, he is out roaming the countryside with a rucksack on his back.Find Nick at nickeastillustration.com