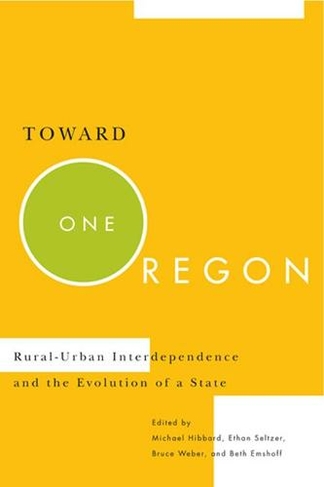 Toward One Oregon: Rural-Urban Interdependence and the Evolution of a State

Every state in the nation has geographic divisions-upstate/downstate, urban/rural, major city/rest of the state-that loom large as barriers to common cause. Toward One Oregon examines the prospects for uniting one geographically diverse state in the years ahead. When Oregon became a state in 1859, its role in the nation and the global economy was quite different than it is today. Boundaries that made sense in the nineteenth century don't always serve twenty-first century needs productively. Current times demand a new, strategic understanding of the state and its role in the nation and the world if its people-all of its people-are to thrive. Oregon, like many states, is faced with recovering and rediscovering a sense of shared purpose as it attempts to meet the needs of its diverse communities, peoples, and landscapes. Toward One Oregon explores Oregon's urban and rural history and assesses the current situation through political, economic, and demographic lenses. The book's contributors include historians, urban planners, journalists, economists, sociologists, and political scientists. They explore the links and splits between urban and rural Oregon and together offer a collaborative path forward-for Oregon and for any state faced with similar, seemingly insurmountable, geographic divisions-using the best of urban and rural policies in strategic and complementary ways.