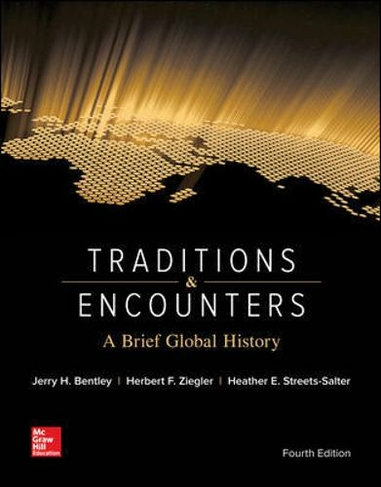 Based on Bentley and Ziegler's best-selling, comprehensive survey program, Traditions & Encounters: A Brief Global History provides a streamlined account of the cultures and interactions that have shaped world history. A focus on the human experience helps frame the broad scope of world history into a clear and concise learning experience for students. Bentley's engaging narrative is available as a digital SmartBook (TM), a personalized eBook that enhances understanding by asking students to demonstrate comprehension as they read. It is also supported by engaging digital tools, such as interactive maps, that encourage critical thinking and retention of key course concepts.

Jerry H. Bentley was professor of history at the University of Hawaii and editor of the Journal of World History. His research on the religious, moral, and political writings of Renaissance humanists led to the publication of Humanists and Holy Writ: New Testament Scholarship in the Renaissance (Princeton, 1983) and Politics and Culture in Renaissance Naples (Princeton, 1987). More recently, his research was concentrated on global history and particularly on processes of cross-cultural interaction. His book Old World Encounters: Cross-Cultural Contacts and Exchanges in Pre-Modern Times (New York, 1993) examines processes of cultural exchange and religious conversion before the modern era, and his pamphlet Shapes of World History in Twentieth-Century Scholarship (Washington, D.C., 1996) discusses the historiography of world history. His most recent publication is The Oxford Handbook of World History (Oxford, 2011), and he served as a member of the editorial team preparing the forthcoming Cambridge History of the World. Jerry Bentley passed away in July 2012. Herbert F. Ziegler is an associate professor of history at the University of Hawai'i. He has taught world history since 1980 and currently serves as director of the world history program at the University of Hawai'i. He also serves as book review editor of the Journal of World History. His interest in twentieth-century European social and political history led to the publication of Nazi Germany's New Aristocracy(1990). He is at present working on a study that explores from a global point of view the demographic trends of the past ten thousand years, along with their concomitant technological, economic, and social developments. His other current research project focuses on the application of complexity theory to a comparative study of societies and their internal dynamics. Heather E. Streets-Salter is department chair and director of world history programs at Northeastern University. She is the author of Marital Races: The Military, Martial Races, and Masculinity in British Imperial Culture, 1857-1914 (2004), Empires and Colonies in the Modern World: A Global Perspective (2015) with Trevor Getz, and Southeast Asia and the Frist World War (forthcoming 2016). Her current research focuses on communist and anti-communist networks in interwar East and Southeast Asia.