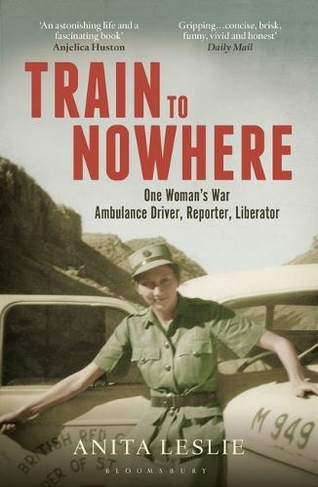 One of Hay Festival's 100 Best Books Written by Women in the Last 100 Years 'Train to Nowhere speaks of another mood, a different time and a grittier generation...This, surely, is the second world war we want to rediscover in print' Robert McCrum, Observer 'If Evelyn Waugh's Mrs Algernon Stitch had been possessed of a heart, a sense of humour, and a glorious prose style, it could be said that she was a dead ringer for Anita Leslie. Train to Nowhere is a glorious book, brought back to vivid life.' John Banville, Booker Prize winning author of The Sea 'Train To Nowhere is the most gripping piece of war reportage I have ever read: particularly affecting is Anita Leslie's account of the Battle of Colmar, where her descriptions are almost too unbearable to take in. What a writer! Her observations, mixed with dry humour and compassion, place her at the heart of the conflict and somehow apart from it, as a good historian should be. Remarkable.' Joanna Lumley Train to Nowhere is a war memoir seen through the sardonic eyes of Anita Leslie, a funny and vivacious young woman who reports on her experiences with a dry humour, finding the absurd alongside the tragic. Daughter of a Baronet and first cousin once removed of Winston Churchill, she joined the Mechanized Transport Corps as a fully trained mechanic and ambulance driver during WWII, serving in Libya, Syria, Palestine, Italy, France and Germany. Ahead of her time, Anita bemoans 'first-rate women subordinate to second-rate men,' and, as the British Army forbade women from serving at the front, joined the Free French Forces in order to do what she felt was her duty. Writing letters in Hitler's recently vacated office and marching in the Victory parade contrast with observations of seeing friends murdered and a mother avenging her son by coldly shooting a prisoner of war. Unflinching and unsentimental, Train to Nowhere is a memoir of Anita's war, one that, long after it was written, remains poignant and relevant. 1 x 16 page black & white plate section

Anita Leslie (1914-1985), daughter of Shane Leslie (Sir John Randolph Leslie, 3rd Baronet) and first cousin once removed of Sir Winston Churchill, was a writer of memoir and biography. She joined the Mechanised Transport Corps as a fully trained mechanic and ambulance driver during WWII, serving in Libya, Syria, Palestine, Italy, France and Germany. She wrote letters home from Hitler's office in the Reich Chancellery and took part in the Victory parade in Berlin. In the latter part of the war she drove an ambulance for the Free French Forces, and was awarded the Croix de Guerre in 1945 by General Charles de Gaulle.Leslie later married Commander Bill King and had two children. She published seventeen books, the last in 1985 - the year she died.