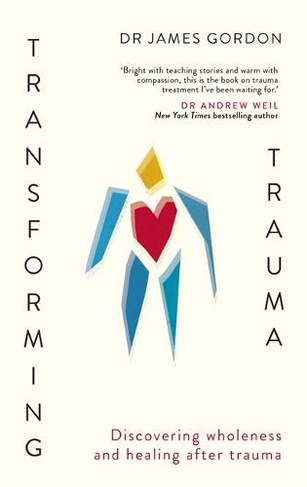 By James Gordon (Author)
Paperback
https://www.whsmith.co.uk/products/transforming-trauma-discovering-wholeness-and-healing-after-trauma/james-gordon/paperback/9781529398120-12-000.html £13.59 rrp £16.99 Save £3.40 (20%)
GBP
Availability
In Stock
Free Delivery Available When You Spend £25 Or More
Details
Spend £25 on eligible products to receive free standard delivery to home or free next working day click and collect to store
Share

The definitive new guide on healing trauma and taming our triggers, by Harvard-trained-Psychiatrist and pioneer of mind-body medicine, Doctor James Gordon. Trauma comes to all of us, through grief or from a painful experience; even if our symptoms do not reach that of Post-Traumatic Stress Disorder, the consequences can be devastating. The good news is that there are self-care tools to help us face the storm, heal our traumas and become healthier and more whole than ever before because of them. In Transforming Trauma, Doctor Gordon equips readers with the first evidence-based program to reverse the effects of trauma on our bodies and minds that he has used to support thousands of people across the world who have suffered - from Syrian refugees and 9/11 survivors to everyday people with emotional or physical illness. Doctor Gordon believes that any challenge can be overcome once you have the right techniques - he will show us how to recognise our triggers step-by-step - those words, actions, perceptions that in some way resemble a past trauma - and let them become our teachers, so we can finally realise that that is then and this is now and in turn, open the door for freedom from our past and a fresh route for hope, purpose and love. 'This is the book on trauma treatment I've been waiting for' - Dr Andrew Weil, New York Times bestselling author + Professor of Medicine 'This book could give you back your life in unimaginable ways, it will inspire you to say 'yes' to the seemingly inconceivable and impossible' - Jon Kabat-Zinn N/A

Harvard-trained Psychiatrist and world-recognised authority DR JAMES GORDON is a former researcher at the National Institute of Mental Health and a Clinical Professor of Psychiatry and Medicine at Georgetown Medical School. He writes regularly for numerous publications including The New York Times and The Washington Post - he is a sought-after expert for such outlets as The Today Show, Good Morning America, CBS This Morning, Nightline, CNN, MSNBC, NPR, 60 Minutes and many leading national newspapers and magazines. In his role as the founder and director of The Center for Mind-Body Medicine (CMBM), the world's largest and most effective program for healing trauma, Dr James Gordon has taught a curriculum that has alleviated trauma to populations as diverse as refugees and survivors of war in Bosnia, Kosovo, Israel, Gaza, and Syria, as well as Native Americans on the Pine Ridge Reservation in South Dakota, New York city firefighters and their families, and members of the US military. Dr Gordon and his team have also used their work to help everyday professionals, stay-at-home mothers, White House officials, medical students and people struggling with severe emotional and physical illnesses.