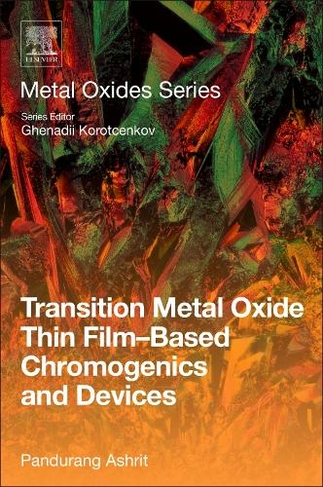 The phase transition and the reversible optical and electrical switching that occur in chromogenic materials under the influence of external forces such as heat, light, and electric field are topics of enormous scientific interest. Transition Metal Oxide Thin Film-Based Chromogenics and Devices discusses experimental and theoretical developments in the field of chromogenics based on the transition metal oxide (TMO) thin films. Understanding the relationship between the switching properties of TMO materials and their nanostructure is of paramount importance in developing efficient chromogenic devices. The tailoring of these switching behaviors is afforded detailed coverage in this book, alongside in-depth discussion of a range of chromogenic materials and devices, including photochromics, thermochromics, and electrochromics. Transition Metal Oxide Thin Film-Based Chromogenics and Devices covers both the theoretical aspects of TMO thin film-based chromogenics and their engineering applications in device construction. Academics and professionals in the fields of materials science and optics will find this book to be a key resource, whether their focus is low-dimension materials, light-materials interactions, or device development.

Professor Pandurang Ashrit is affiliated to the Department of Physics and Astronomy at the Universite de Moncton, Canada. He is a named author on 75 documents, many of them dealing with thin films and chromogenic materials, and has patented a technique for chromogenically tuning photonic crystals. In 2013 he was granted an Innovation award for Excellence in Applied Research by the Government of New Brunswick. Ghenadii Korotcenkov received his Ph.D. in Physics and Technology of Semiconductor Materials and Devices in 1976, and his Doctor Habilitate Degree (Dr. Sci.) in Physics and Mathematics of Semiconductors and Dielectrics in 1990. Long time he was a leader of scientific Gas Sensor Group and manager of various national and international scientific and engineering projects carried out in Laboratory of Micro- and Optoelectronics, Technical University of Moldova. His research had financial support from International Foundations and Programs such as CRDF, MRDA, IREX, ICTP, INTAS, INCO-COPERNICUS, COST, NATO. Currently G. Korotcenkov is a research Professor in Gwangju Institute of Science and Technology, Republic of Korea.Specialists from Former Soviet Union know G. Korotcenkov's research results in the field of study of Schottky barriers, MOS structures, native oxides, and photoreceivers on the base of III-Vs compounds very well. His current research interests include material sciences and surface science, focused on metal oxides and solid state gas sensor design. Korotcenkov is the author of seven books and special issues and editor of 11 books. He published fifteen invited review papers, 19 book chapters, and more than 200+ peer-reviewed articles. He is a holder of 18 patents. He presented more than 200 reports on the National and International conferences. Last years his articles had more 400 citing per annum (h-factor=33 (Scopus) and h=36 (Google Scholar)). His research activities are honored by Award of the Supreme Council of Science and Advanced Technology of the Republic of Moldova (2004), The Prize of the Presidents of Ukrainian, Belarus and Moldovan Academies of Sciences (2003), Senior Research Excellence Award of Technical University of Moldova (2001; 2003; 2005), Fellowship from International Research Exchange Board (1998), National Youth Prize of the Republic of Moldova (1980), among others.