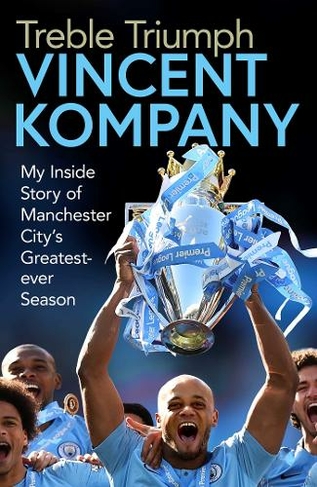 Treble Triumph: My Inside Story of Manchester City's Greatest-ever Season

Vincent Kompany relives a spectacular and unique season for Manchester City, in which as club captain he led the Blues to a unique Treble success of Premier League, FA Cup and Carabao Cup triumphs. Told from his unique viewpoint, this is the definitive account of a remarkable campaign. After Manchester City had won the Premier League title in 2018, collecting a record number of points along the way, the pressure was on for them to go one better in 2019 - but instead they went two better, winning every single major domestic trophy, starting with the Community Shield. In this frank and compelling book, Kompany tells the dramatic story of Manchester City's record-breaking season. In the league, they faced a formidable challenge from Jurgen Klopp's Liverpool that went all the way to the final game of the campaign. He takes the reader behind the scenes, to give them an insight into how manager Pep Guardiola inspired them and came up with the right decisions at the right time; he explains what made his team-mates, from Aguero up front to Ederson in goal, so special; and, having scored a spectacular thunderbolt of a goal to virtually secure the title, he explains how and why he decided that the time had come to move on from the club he had adorned for more than a decade. Vincent Kompany is a club legend, and now he has delivered an account of a special season that will be treasured by City fans everywhere. 2x 8pp colour

Vincent Kompany was born in Brussels, Belgium, in 1986. He began his career playing for Anderlecht, and after a brief spell at Hamburg, he joined Manchester City in 2008. In 2011, he became club captain and continued in that role until he left the club at the end of the 2018-19 season, having won ten major trophies with them. Since making his debut for Belgium in 2004, he has won almost 90 caps for his country. He returned to Anderlecht for the 2019-20 season.