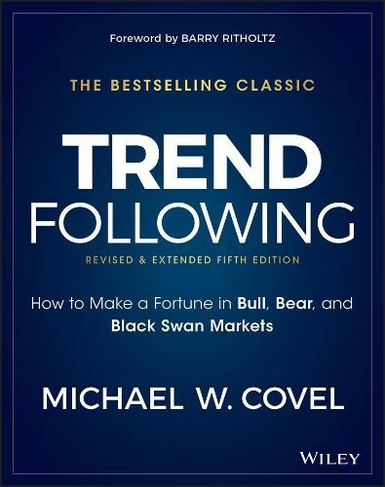 Trend Following How to Make a Fortune in Bull, Bear, and Black Swan Markets 5th Edition

Also available on eBook for £23.99. Click here to purchase from Rakuten Kobo

Want to take the financial journey to a new investing philosophy that might very well affect the rest of your moneymaking life? No one can guarantee the yellow brick road, but Michael Covel promises the red pill will leave you wide freaking awake. Trend Following reveals the truth about a trading strategy that makes money in up, down and surprise markets. By applying straightforward and repeatable rules, anyone can learn to make money in the markets whether bull, bear, or black swan by following the trend to the end when it bends. In this timely reboot of his bestselling classic, Michael Covel dives headfirst into trend following strategy to examine the risks, benefits, people, and systems. You ll hear from traders who have made millions by following trends, and learn from their successes and mistakes insights only here. You ll learn the trend philosophy, and how it has performed in booms, bubbles, panics and crashes. Using incontrovertible data and overwhelming supporting evidence, with a direct connection to the foundations of behavioral finance, Covel takes you inside the core principles of trend following and shows everyone, from brand new trader to professional, how alpha gets pulled from the market. Covel s newest edition has been revised and extended, with 7 brand new interviews and research proof from his one of kind network. This is trend following for today s generation. If you re looking to go beyond passive index funds and trusting the Fed, this cutting edge classic holds the keys to a weatherproof portfolio. * Meet great trend followers learning their rules and philosophy of the game * Examine data to see how trend following excels when the you-know-what hits the fan * Understand trend trading, from behavioral economics to rules based decision-making to its lambasting of the efficient markets theory * Compare trend trading systems to do it yourself or invest with a trend fund Trend following is not prediction, passive index investing, buy and hope or any form of fundamental analysis. It utilizes concrete rules, or heuristics, to profit from a behavioral perspective. Trend Following is clear-cut, straightforward and evidence-based and will secure your financial future in bull, bear and black swan markets. If you re finally ready to profit in the markets, Trend Following is the definitive treatise for a complex world in constant chaos.

Michael W. Covel searches. He digs. He goes behind the curtain to reveal a state of mind the system doesn't want you in. Michael teaches beginners to seasoned pros how to generate profits with straightforward and repeatable rules. He is best known for popularizing the counterintuitive and controversial trading strategy, trend following. His perspectives have garnered international acclaim and have earned him invitations with a host of organizations: China Asset Management, GIC Private Limited (Singapore), BM&F Bovespa, the Managed Funds Association, Bank of China Investment Management, the Market Technicians Association, and multiple hedge funds and mutual funds. He also has the distinction of having interviewed five Nobel Prize winners, including Daniel Kahneman and Harry Markowitz, on his Trend Following podcast which now exceeds 500 episodes and 5 million listens. Michael's consulting clients include individual traders, hedge funds, sovereign wealth funds, and institutional investors in more than 70 countries. He splits his time between the United States and Asia. www.trendfollowing.com