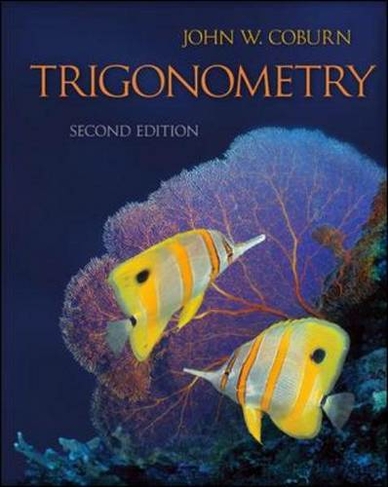 Three components contribute to a theme sustained throughout the Coburn Series: that of laying a firm foundation, building a solid framework, and providing strong connections. Not only does Coburn present a sound problem-solving process to teach students to recognize a problem, organize a procedure, and formulate a solution, the text encourages students to see beyond procedures in an effort to gain a greater understanding of the big ideas behind mathematical concepts. Written in a readable, yet mathematically mature manner appropriate for college level students, Coburn's Trigonometry uses narrative, extensive examples, and a range of exercises to connect seemingly disparate mathematical topics into a cohesive whole. Coburn's hallmark applications are born out of the author's extensive experiences in and outside the classroom, and appeal to the vast diversity of students and teaching methods in this course area. Benefiting from the feedback of hundreds of instructors and students across the country, Trigonometry, Second Edition, continues to emphasize connections in order to improve the level of student engagement in mathematics and increase their chances of success in trigonometry. Figures; Tables, black and white

John Coburn grew up in the Hawaiian Islands, the seventh of sixteen children. He received his Associate of Arts degree in 1977 from Windward Community College, where he graduated with honors. In 1979 he received a Bachelors Degree in Education from the University of Hawaii. After being lured into the business world for five years, he returned to his first love, accepting a teaching position in high school mathematics where he was recognized as Teacher of the Year in 1987. Soon afterward, the decision was made to seek a Masters Degree, which he received two years later from the University of Oklahoma. For the last fifteen years, he has been teaching mathematics at the Florissant Valley campus of St. Louis Community College, where he is now a full professor. During his tenure there he has received numerous nominations as an outstanding teacher by the local chapter of Phi Theta Kappa, two nominations to Whos Who Among Americas Teachers and was recognized as Teacher of the year in 2004 by the Mathematics Educators of Greater St. Louis (MEGSL). He has made numerous presentations and local, state and national conferences on a wide variety of topics. His other loves include his family, music, athletics, games and all things beautiful, and hopes this love of life comes through in his writing, and serves to make the learning experience an interesting and engaging one for all students.