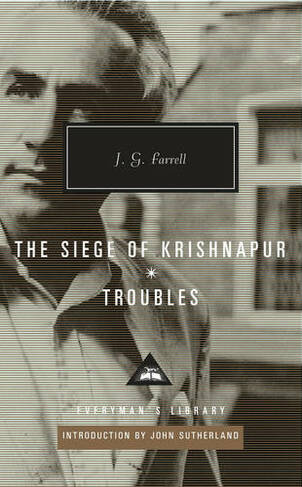 Troubles: The Siege of Krishnapur

Inspired by the Indian Mutiny of 1857, The Siege of Krishnapur is set in the fictional town of that name where a British garrison withstands a four-month siege by mutineers. Eventually rescued after undergoing terrible privations, the leading characters all find their ideals tested and their smug assumptions of military and moral superiority severely shaken. In Troubles Major Brendan Archer travels to Ireland in the aftermath of World War I in order to meet his fiancee Angela in a remote seaside hotel owned by her father. Angela dies unexpectedly, but Archer remains in Kilnalough, captivated by the Majestic and its inhabitants, and seemingly unaware of the approaching political storm as Ireland dissolves into revolt and civil war. Both novels combine high comedy with vivid realism and reveal Farrell as 'one of the finest post-colonial novelists' - John Sutherland.

J.G. Farrell was born in Liverpool in 1935 and spent a good deal of his life abroad, including periods in France and North America, and then settled in London where he wrote most of his novels. In April 1979 he went to live in County Cork where only four months later he was drowned in a fishing accident.INTRODUCER BIOGRAPHY: John Sutherland is Lord Northcliffe Professor Emeritus of Modern English Literature at University College London and currently teaches at the California Institute of Technology. He writes regularly for the Guardian and is the author of many books including The Longman Companion to Victorian Fiction, biographies of Scott and Spender, and The Boy Who Loved Books, a memoir.