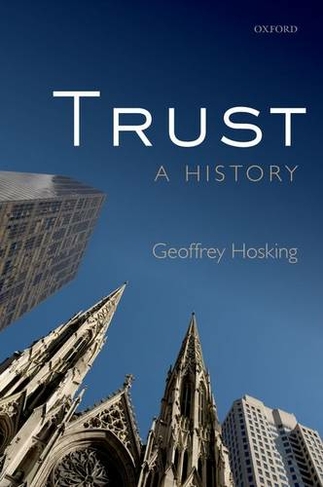 Also available on eBook for £31.43. Click here to purchase from Rakuten Kobo

Today there is much talk of a 'crisis of trust'; a crisis which is almost certainly genuine, but usually misunderstood. Trust: A History offers a new perspective on the ways in which trust and distrust have functioned in past societies, providing an empirical and historical basis against which the present crisis can be examined, and suggesting ways in which the concept of trust can be used as a tool to understand our own and other societies. Geoffrey Hosking argues that social trust is mediated through symbolic systems, such as religion and money, and the institutions associated with them, such as churches and banks. Historically these institutions have nourished trust, but the resulting trust networks have tended to create quite tough boundaries around themselves, across which distrust is projected against outsiders. Hosking also shows how nation-states have been particularly good at absorbing symbolic systems and generating trust among large numbers of people, while also erecting distinct boundaries around themselves, despite an increasingly global economy. He asserts that in the modern world it has become common to entrust major resources to institutions we know little about, and suggests that we need to learn from historical experience and temper this with more traditional forms of trust, or become an ever more distrustful society, with potentially very destabilising consequences.

Geoffrey Hosking is Emeritus Professor of Russian History at University College London. A Fellow of the British Academy and an Honorary Doctor of the Russian Academy of Sciences, he was BBC Reith Lecturer in 1988. He has written numerous books on Russian history and culture, including Beyond Socialist Realism, A History of the Soviet Union, and Russia and the Russians. He has taught at the Universities of Essex, Wisconsin-Madison, Cologne andCambridge. He has served on the councils of the Britain-Russia Centre and Index on Censorship, and at various times on the editorial boards of the Slavonic & East European Review, Journal of Contemporary History, Nations and Nationalism, Ab Imperio, and Rossiiskaia istoriia (the principal Russian Academy journal on Russianhistory).