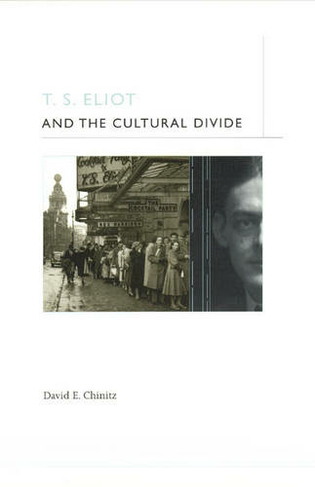 For decades T. S. Eliot has been applauded and denounced as a staunch champion of high art and an implacable opponent of popular culture. But Eliot's elitism was never what it seemed. "T. S. Eliot and the Cultural Divide" represents this great writer as the complex figure he was, an artist attentive not only to literature but also to detective fiction, Vaudeville Theater, jazz, and the songs of Tin Pan Alley. David Chinitz argues that Eliot was productively engaged with popular culture in some form at every stage of his career, and that his response to it, as expressed in his poetry, plays, and essays, was dynamic rather than hostile. He shows that American jazz, for example, was a major influence on Eliot's poetry during its maturation. He discusses Eliot's surprisingly persistent interest in popular culture, both in such famous works as "The Waste Land" and in such lesser-known pieces as "Sweeney Agonistes". And he traces Eliot's long, quixotic struggle to close the widening gap between high art and popular culture through a new type of public art: contemporary popular verse drama. What results is a work that will persuade adherents and detractors alike to return to Eliot and find in him a writer who liked a good show, a good thriller, and a good tune, as well as a "great" poem.