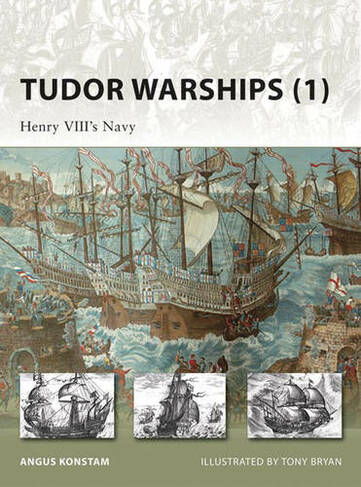 In this book, expert Angus Konstam explores the fledging Tudor Navy, tracing its history, from its origins as a merchant fleet under Henry VII through to its emergence as a powerful force under Henry VIII. Examining the operational use of Henry's Tudor warships the author analyzes the battle of the Solent in 1545, in which Henry's fleet took on a French fleet of 200 ships - much larger than the Spanish Armada decades later. Despite the well documented loss of his flagship, the Mary Rose Henry's smaller force succeeded in preventing a French victory. Although many people will have heard of the mighty Mary Rose, this book will tell the story of more than just the tragic sinking of Henry's flagship, describing how one of history's most dynamic kings grew the navy from the five warships that were his father's legacy to fifty-three deadly gunships at the forefront of his empire-building strategy. Through contemporary illustrations and intricate artwork, the author traces the changing face of warship design during the Renaissance as Henry paved the way for English dominance of the sea. Illustrations (some col.)

Angus Konstam hails from the Orkney Islands and is the author of over 20 books for Osprey. Formerly the Curator of Weapons in the Royal Armouries at the Tower of London, he also served as the Chief Curator of the Mel Fisher Maritime Museum in Key West, Florida. His maritime titles for Osprey include Elite 67: Pirates 1660-1730, Elite 69: Buccaneers 1620-1700 and Elite 70: Elizabethan Sea Dogs 1560-1605. The author lives in Edinburgh, Scotland.