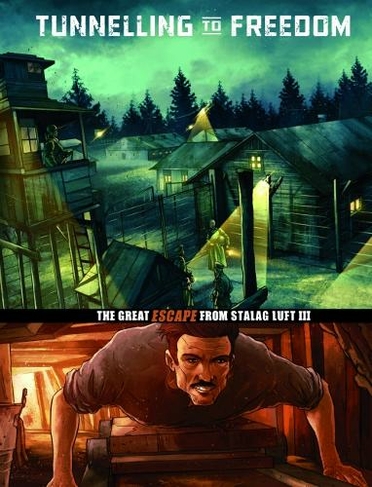 Tunnelling to Freedom The Great Escape from Stalag Luft III

Experience the incredible story of the brave men who tunnelled to escape a German prisoner-of-war camp. Readers will learn about the planners, task leaders and key players of the escape from Stalag Luft III.

The career path of Nel Yomtov has taken him from the halls of Marvel Comics, as an editor, writer, and colorist, to the world of toy development. He then became editorial and art director at a children's nonfiction book publisher, and now Nel is a writer and editor of books, websites, and comics for children. A harmonica-honking blues enthusiast, Nel lives in New York with his wife, Nancy. They have a son, Jess. Alessandro Valdrighi was born by the sea in 1980 in beautiful Castiglione della Pescaia, Italy. He studied at the prestigious Accademia di Belle Arti (Academy of Fine Arts) in Florence and graduated with a Bachelor's degree as a set designer. Alessandro learned to draw at an early age by copying comics and illustrations from books. He believes this is the reason he is now successful using multiple art styles. Alessandro has worked as a cartoonist, illustrator, and concept artist in both traditional and digital media. In 2011 he won a prize for his work on Lagrimas en la lluvia, featured as the best comic book publication in Spain. Alessandro lives and works in Siena, Italy, with his wife and baby, and a crazy cat.