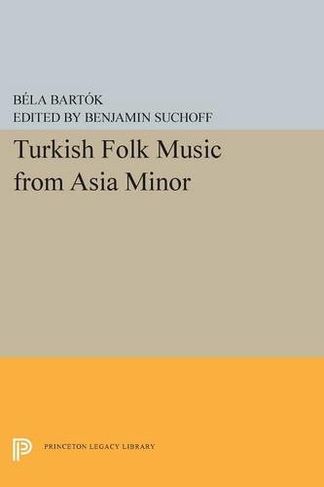 This book is a substantial and thorough musicological analysis of Turkish folk music. It reproduces in facsimile Bartok's autograph record of eighty seven vocal and instrumental peasant melodies of the Yuruk Tribes, a nomadic people in southern Anatolia. Bartok's introduction includes his annotations of the melodies, texts, and translations and establishes a connection between Old Hungarian and Old Turkish folk music. Begun in 1936 and completed in 1943, the work was Bartok's last major essay. The editor, Dr. Benjamin Suchoff, has provided an historical introduction and a chronology of the various manuscript versions. An afterword by Kurt Reinhard describes recent research in Turkish ethnomusicology and gives a contemporary assessment of Bartok's field work in Turkey. Appendices prepared by the editor include an index of themes compiled by computer. Originally published in 1976. The Princeton Legacy Library uses the latest print-on-demand technology to again make available previously out-of-print books from the distinguished backlist of Princeton University Press. These editions preserve the original texts of these important books while presenting them in durable paperback and hardcover editions. The goal of the Princeton Legacy Library is to vastly increase access to the rich scholarly heritage found in the thousands of books published by Princeton University Press since its founding in 1905.